You are at:Home»Current in Zionsville»Le Dolce Vita employees go unpaid 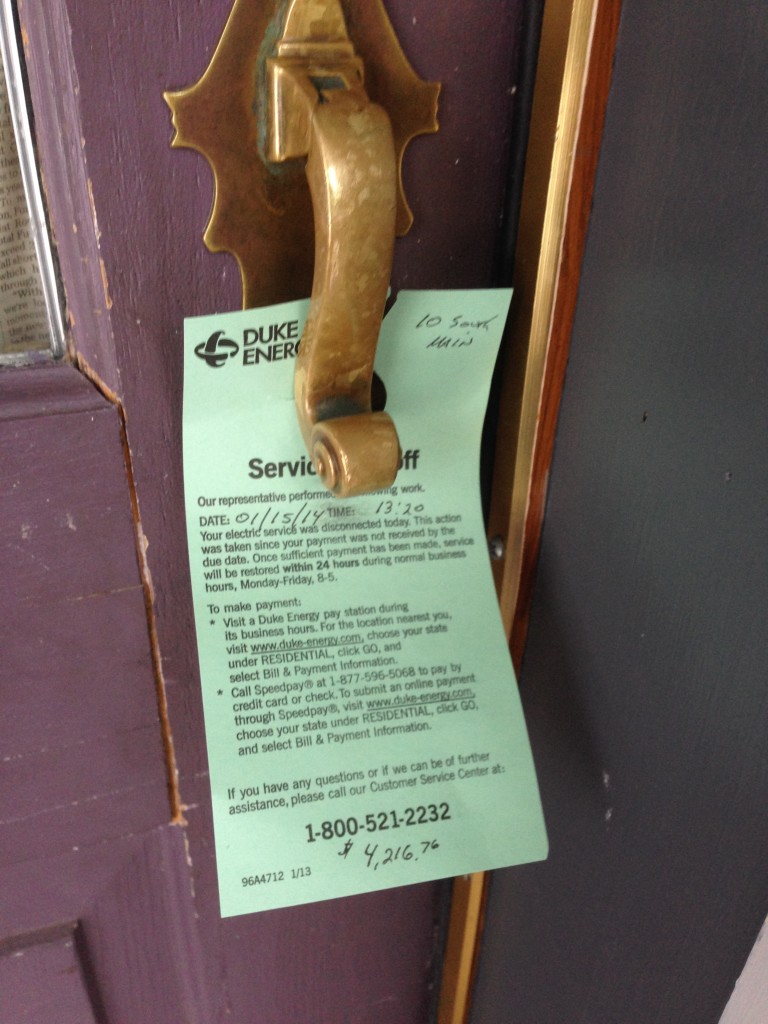 The blue slip is from Duke Energy, the company that provided power to the now-vacant café Le Dolce Vita at 10 S. Main St.

Claims of unpaid bills, angry employees and bouncing checks have been lingering over the empty coffee tables inside for months. Now, former employees are speaking out and demanding answers.

Hannah, who declined to give her last name, is a former employee of Le Dolce Vita and said, “The whole thing was just super sketchy.”

Frustrations from the start

“I had respect for [owner Kelly Evans]and she seemed really ambitious when we had the big opening in June,” said former employee Hillary, who also declined to give her last name. “But then checks started bouncing a month after we had been open.”

In December, Evans stated that the café and French patisserie would be closed for the month of January in order to move locations and partner with sister company Union Baking Co. in Westfield.

However, employees say Evans was never prepared to run the café, and likely will not reopen.

“[Evans] was never around,” Hannah said. “And she really should have been, especially since it was such a big crossover and nobody knew what she was doing.”

Hannah said her and other employees’ paychecks bounced, leaving the untrained managers to deal with the multiple paycheck problems.

She remembers one time when her bank told her it could not cash her check because of insufficient funds, which caused her to incur an $11 fee. It took several weeks for a manager at Le Dolce Vita to pay her, in cash, the money she was owed and reimburse her for the $11 fee.

Former employee Sarah Salas worked at Eagle Creek Coffee Company and Le Dolce Vita. She stayed only until August and had an experience similar to Hannah’s.

“I worked for Kelly briefly, but my last paycheck bounced,” Salas stated in an e-mail to “Current in Zionsville.” “I was able to collect the amount (I was) owed after badgering her about it for a couple of weeks. She paid me in cash, but I am unsure where the funds came from.”

Hillary said Evans still owes her over $500 from the hours she worked in December.

“I tried to cash this one check four times and every time it kept bouncing, so I went to [Evan’s] bank to cash it and the tellers just looked at me with pity,” Hillary said.

After discovering that Le Dolce Vita would be closed for the month of January (a fact that Hillary said Evans did not announce to the staff in person), Hillary tried to file for unemployment in Boone County. However, she was deemed ineligible because Evans had never claimed her as an employee during the more than seven months she had worked there.

“One thing that has made me really angry is that I have a lot of customers who we kept telling we would reopen on Main Street, but then I found out on Facebook we were moving,” Hillary said. “And nobody has gotten her W2 yet, either. At some point I just decided I cannot deal with this anymore.”

Hillary has since found a job at Starbucks.

In a post dated Jan. 14, Evans stated on her Facebook page that running her business is “very personal.”

“This shop and our customers are my life and my family,” Evans stated. “It means more than I could ever express and we are excited to continue in this town that has been so great to us.”

Yet, former employees question how and when Evans will be able to “continue” her business model, even after her proposed partnership with Union Baking Co.

“I just don’t think Kelly realized how big a project it was going to be,” Hannah said. “She just didn’t have the funds.”

“The worst thing that [Evans] has said to me in a text message was to go and cash the check even though she knows the check is bad,” Hillary said.

Current has received no response from Evans despite several attempts to reach her over the past two weeks.