You are at:Home»Current in Fishers»Local student wins national NFL competition 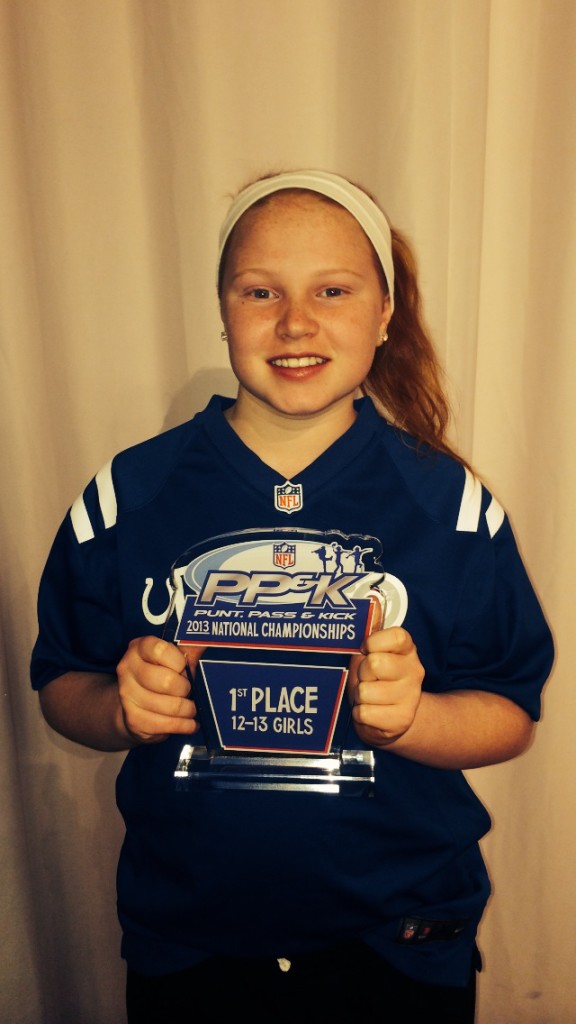 The 2013 Punt, Pass & Kick National Championships were held in December in Denver. Sophia Saucerman, a seventh-grader at Heritage Christian School, represented the Indianapolis Colts in the NFL-run competition and won the championship for her age group.

The NFL sponsors the PP&K competition and there is no charge to participate; boys and girls ages 6 to 15 are welcome to find a local PP&K event and compete. Boys’ and girls’ events are separate and everyone is divided into age groups.

Saucerman was a finalist in 2012 and competed again in 2013, managing to come in first in a local PP&K event and first in sectional and state competitions. She earned a spot in the finals and went on to win the PP&K championship in the girls’ 12-13 age group. Saucerman was honored with other PP&K champions on the football field during the Jan. 12 Broncos/Chargers game.

“I like that I got to go to the game and get announced,” Saucerman said.

The competition is made up of one punt, one pass and one placekick. Each participant receives a cumulative score made up of points awarded in all three events. Saucerman’s score was an impressive 314.4 feet.

“It was nerve-wracking,” Sophia said, when talking about competing at the national finals. “But my nerves went away when I did my first round of events,” she continued. “It was a lot better than when I did it last year and I felt confident.”

Sophia is excited to continue competing in PP&K events and said she is very happy with her 2013 performance. “I want to do this until I’m 15,” she said.