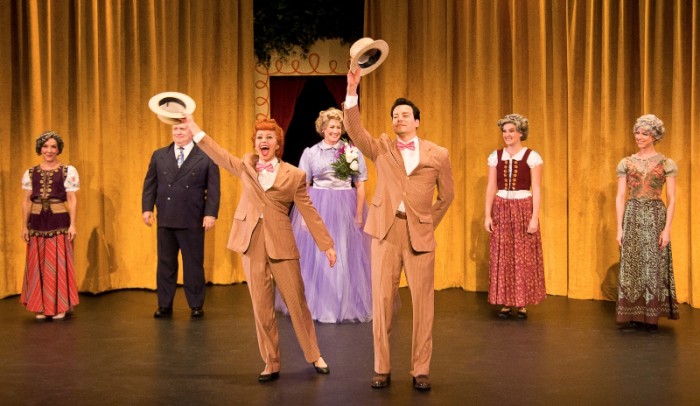 Imagine getting the chance to visit a television studio to watch the filming of a popular TV show and how thrilling it would be to see your favorite actors and actresses bring iconic characters to life.

Now imagine it is 1952, the television show is “I Love Lucy” and lucky viewers have the chance to watch actors recreate the familiar characters of Lucy, Ricky, Fred and Ethel.

When “I Love Lucy: Live on Stage” comes to Old National Centre in Indianapolis the audience will get to watch a play that resembles two tapings of the classic American show, “I Love Lucy.”

“It’s as if the audience has stepped back into 1952,” said Joanna Daniels, the actress who plays Ethel. “We even have jingles from the commercials back then.”

“I Love Lucy: Live on Stage” opened in Los Angeles in October 2011, played to sold-out crowds and earned rave reviews. The show moved on to Chicago and is now in the midst of a national tour which started in July and runs through June.

“I’ve yet to meet anyone who was disappointed,” Daniels said. “We meet a lot of serious fans of the original show, and they are appreciative. It’s a real honor to bring these characters back to life.”

The original TV show has generations of fans, and audiences of the new play are also full of young adults and kids who have come to know it.

“The show is kind of like a TV dinner, like comfort food,” Daniels said. “It seems like everyone, one way or another, has grown up with it. We meet young kids who watch the show and know it and it is fun to see.”