You are at:Home»Current in Carmel»Blaze Pizza opening soon in Carmel 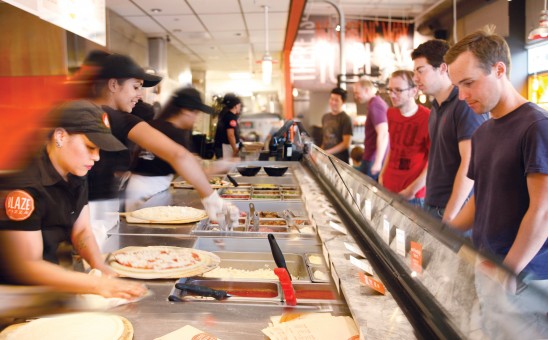 Customers at Blaze Pizza get to see their pizza being made as it moves down an assembly line. (Submitted photo)

Carmel residents hopefully will have another quick lunch option later this year when Blaze Pizza opens up shop at 12697 Pennsylvania St., in the Meijer Outlet Shops.

The first Blaze Pizza in Indiana is scheduled to open on the IUPUI campus later this month.

What makes Blaze Pizza different from every other pizza joint we have in town already?

Blaze Pizza calls itself a “build-your-own-artisan-pizza” restaurant — in other words, the “Chipotle” of pizza. It invites guests to “co-create” their own work of art by traveling down an assembly line to craft an individual 11-inch pizza to exactly their own specifications, choosing from more than 40 artisanal toppings.

The toppings include unique, chef-driven choices such as roasted garlic, caramelized onions, meatballs shipped in from New York and vegan cheese.

The pizza is then fired in a 600 to 800 degree oven and is ready in three minutes.

Another thing that sets Blaze Pizza apart is the cost — even if you choose more toppings than your crust can reasonably hold, the price is, at most, $6.95 (less for plain cheese or one-topping pizzas; slightly more for a gluten-free crust).

The owners are currently in the process of securing building permits and hope to be open before the end of the year.

Blaze Pizza is a Los Angeles-based company, and franchisee Blaze Midwest plans to open six to eight stores in the greater Indianapolis area in the coming years, according to Marketing Director Darla Bowen. The menu also features signature salads, fresh lemonade and house-made s’more pie. Although some locations offer beer and wine, there is currently no plan to do so in the Carmel store.

“We are very excited about the greater Indianapolis market,” said Blaze Midwest President Rodney Walker. “We are looking forward to bringing our fast-casual pizza concept to Indiana and the Midwest.”