You are at:Home»Night & Day»‘Cats’ pounces onto the Beef & Boards stage 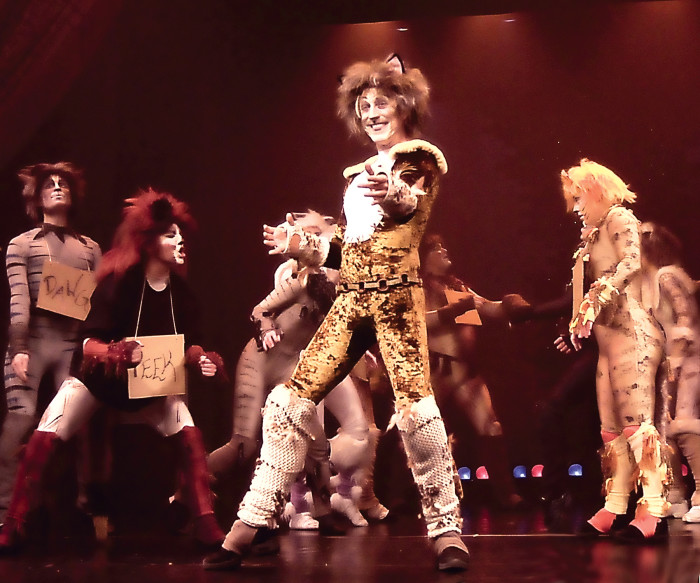 The seven-time Tony-Award-winning “Cats” pounces onto the Beef & Boards Dinner Theatre stage as the first musical in its 2014 season.

Andrew Lloyd Webber’s playful production is the second-longest running show in Broadway history and will be presented from Feb. 6 through March 30 at Beef & Boards.

“Cats” brings audiences into the poetry of T.S. Eliot, whose “Old Possum’s Book of Practical Cats” inspired the musical about frolicking felines gathering for the Jellicle Ball. One by one, they introduce themselves in hopes of being selected by their leader, Old Deuteronomy, to be reborn into a new life with a journey to the Heavyside Layer.

Featuring spectacular dancing, amazing makeup and colorful costumes, “Cats” is an unforgettable experience in the intimate atmosphere of Beef & Boards Dinner Theatre – where they are close enough to touch. Not just on stage, the frolicking creatures are in the aisle and all around, even overhead.

Kenny Shepard of Fishers reprises his role of the narrator, Munkustrap, who he has played in both of Beef & Boards’ previous productions of “Cats.” Performing for the first time at Beef & Boards are J.S. McLaughlin as Old Deuteronomy and Eileen Faxas as Grizabella, who sings the show’s famous “Memory.”