You are at:Home»Current in Zionsville»Welcome to the South Village 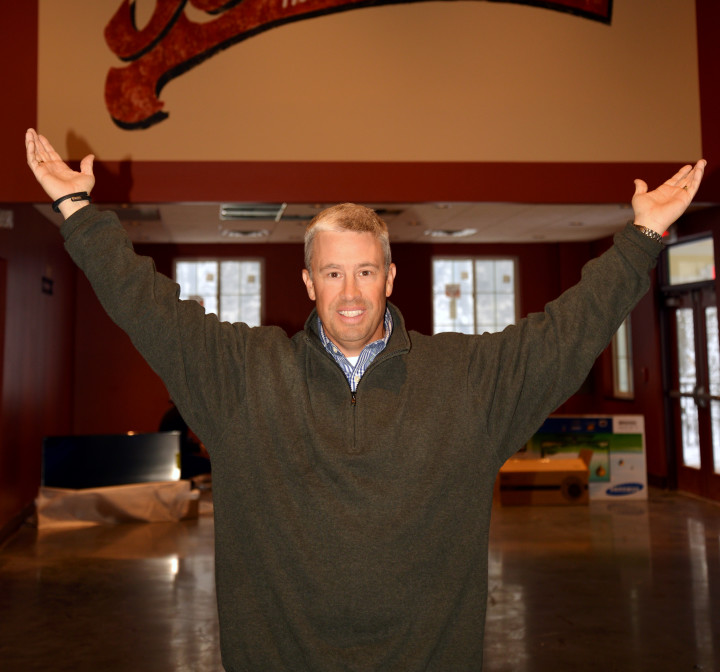 Bob Harris, developer and property owner of the South Village is excited with Bub’s opening. (Photo by Dawn Pearson)

The Big Ugly arrives with the opening of Bub’s Burgers

All it took was one bite and it was love at first taste for Zionsville developer Bob Harris.

“I had finished a great lunch, and the service as always was fabulous, when the server comes over and says, ‘Is there anything else I can get you?’” Harris said. “I said, “Yes, a Bub’s in Zionsville so I don’t have to drive to Carmel.’”

Harris is part owner of Harris Family Limited Partners and responsible for the daily operations of the family business that owns the property, dubbed the South Village, where Bub’s Burger and Ice Cream will be locating soon. Frey said the target date is the week of Jan. 13 and hopes the winter storm won’t delay the grand opening near 106th Street on South Main Street. 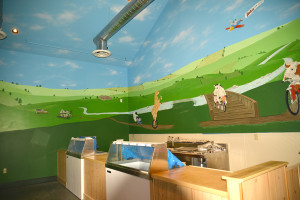 “We will have a lot more space to meet with our clients, host meetings, etc.,” Moore stated. “I anticipate 2014 being another incredible year for Zionsville real estate so this larger, nicer space is coming at the perfect time.” According to Moore, the projected move date to the new space in South Village is March.

In addition to the strip next to Bub’s, a stand-alone building also under construction shares the same parking lot.

“Storen Financial found other space, and Bub’s helped attract tenants for the second building. I have commitments for all five spaces, and we are working with a business for the building across the drive currently under construction,” said Moore

Harris is confident traffic won’t be a problem.

“The town is doing a great job with the traffic study along with A and F Engineering,” he said. They (A and F) always find great solutions. There will be a healthy retail area and the traffic will flow. It’s not easy but we will just keep working together,” Harris said.

Matt and Rachel Frey, owners of Bub’s Burgers, which first opened in May 2003 in Carmel, said it’s exciting to be part of that first level of growth in the South Village.

“Bob (Harris) is great to deal with, and the key is great communication. He gets what I’m trying to do and I get him,” Frey said.

Development brings jobs and Bub’s will employ 75-80 people, most of whom will be from Zionsville.

“We’ve hired a lot and have 48 or 49 on payroll, and we need 20-30 more young kids,” Frey said. “We’re always hiring, especially young people, to train them about professionalism and teamwork. Our motto is, school, family, religion, extracurricular activities and then work. It’s what we do. Grades come first,” said Frey, who has three school-aged children. To accommodate that motto, Frey said each young person usually has just two to three shifts a week.

“The Freys are not only about the success of the restaurant, they develop young kids,” Harris said. “People tell me, ‘Hey, my kid needs to get a job at Bub’s,’ and I tell them that they will work! If you work for Matt you will work hard and be a part of a great, successful team. It’s amazing everything he and Rachel do for a community.”

As business owners, the Freys view community involvement as part of their responsibility.

“If you do what you should as a business and contribute to the community, then the people will come back, but you’ve got to give back, too.” In Carmel, he is a member of the Chamber of Commerce and the Library Board, and has sponsored many athletic teams.

“It’s an obligation every business has to its community, especially in this (restaurant) business,” he said. “But you’ve got to have a product people like.”

Frey started working in the restaurant business when he was 14. He got additional experience “through 10 years of food sales, mostly with Kellogg’s,” he said.

In addition to community involvement and having a good product, Frey said Bub’s has benefited from keeping it simple. “We have a small menu, with quality products people love. You don’t have to think very hard when you come in, keep it simple and have every item great on the menu,” Frey said.

“With Matt and Rachel Frey, there’s no doubt Bub’s will be great for them and the families of Zionsville,” Harris said. 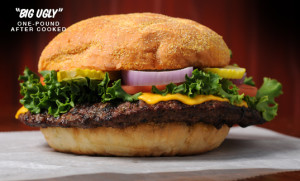 Bub’s is known for “The Big Ugly Challenge” and only three men have successfully completed it, according to Frey.

In 2010, Adam Richman of Man vs. Food, on The Travel Channel, tackled The Big Ugly Challenge — and lost.

The Challenge is to eat four Big Ugly one-pound burgers. “It’s four pounds of meat and two pounds of bread, not including the cheese and produce that goes on The Big Ugly,” Frey said. “Only three have succeeded. Richman could only eat two.”

And what do the iron-stomached carnivores who succeed receive? One Big Ugly equals one 4″x6″ photo being posted on the Bub’s wall; inhaling two means an 8″x10″ photo is posted; and if you eat three, a poster of you will be displayed. As for those three Big Ugly winners who consumed four, they have life-sized photos up, according to Frey. 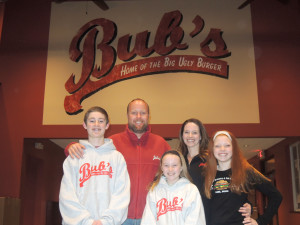 Scheduled to open in Zionville’s South Village the week of Jan. 13

Third Bub’s Burgers opened in Bloomington near IU in 2009