You are at:Home»Current in Carmel»Carmel Cover Stories»Lack of parking hurts businesses 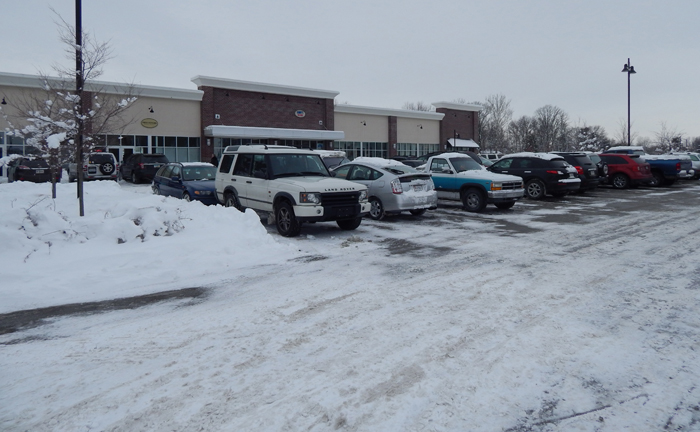 Lenny’s Sub Sob on 116th Street is struggling because customers have nowhere to park at the strip mall it’s located at. (Staff photo/Karen Kennedy)

Carmel continues to aim for becoming an ideal small town with the walkable features of a big city, but something might soon have to give.

In larger cities like Chicago, people don’t think twice about parking ten or so blocks away and hoofing it. But what if there is no parking down a city street on any side of your destination? What if your business is located on a tiny island of concrete with no street parking on any side of it?

It’s a situation that Carmel business owners are struggling to overcome.

“It’s a disaster. There are cars everywhere. You can’t even get through,” said Ed Wooton, owner of Lenny’s Sub Shop, located in the tiny strip mall on the north side of 116th Street between Guilford road and College Avenue.

Lenny’s Sub Shop has been in business since 2008. Wooton was one of the first tenants in the development that also includes the “One One Six” apartments. One of the other original tenants, I Sushi restaurant, has relocated to a new building on Guilford Street.

And in the beginning there was enough parking while only half the commercial space was occupied, but tenants were promised more.

Although the strip mall is part of a “Planned Unit Development” called 116th Street Centre approved in 2005, it was originally supposed to include two more buildings to the west, both with large parking lots which could have accommodated overflow parking for the strip mall. But those buildings and parking lots were never built before the property was seized by a lender bank.

The development is now owned by TCP Guilford of Zionsville.

“We bought the land from the bank eighteen months ago,” said Chris McCrea, one of the owners of TCP Guilford. “We’ve never had any plans to develop any more of the land. When these merchants signed their leases, there were 58 parking spots. Working with JC Hart (of the One One Six complex) and the city, we managed to add 28 more. We’ve tried to create a merchant mix that utilizes different day parts. I honestly don’t know what else we can do.”

“Our problem used to be that you couldn’t get a seat at lunchtime,” Wooton said of Lenny’s early success. “We would be packed every day for lunch and that paid our bills. Everything that came in after 4 p.m. was our profit. That’s all gone now, because nobody could park here in the evenings. In July, we finally just gave up and closed at night.”

“Between the classes at the dance studio and the outdoor patio at Upland, every spot was taken. And during the day, the hair salon, which has room for twenty-six stylists, packs the lot, so even lunches have slowed down. I’m trying to do more catering to make up the difference. I’ve cut my staff in half. What else can I do?” Wooten asked.

“I can look out the window at 5 p.m. and every spot is already full. And the cars are illegally parked —they’re everywhere. They even block our mailbox. We can go a week without getting mail because the mailperson can’t get near it. I complained to the city. They added about ten spaces, but it’s not nearly enough,” he said.

Every development is unique, and parking allotments as well as other criteria for all applications are determined individually. However, according to the parking formulas established in the Carmel City Code, these are the approximate number of parking spaces that each business should have:

By these numbers, the lot should have approximately 114 spaces. It has 86; a shortage of 28 spots. And that does not take into account an additional 56 seats in Upland’s outdoor café.

That’s because the parking formulas do not take outdoor seating into account.

Per the formula for necessary parking to accommodate those additional 56 seats, an additional 22 spots would be needed in the summer months, bringing the parking shortage up to 50 spots — nearly half as many parking spots as needed.

“As far as the zoning ordinance goes, parking is calculated off of certain ratios, either by square footage or number of seats inside of the building, and it is based off of use, such as restaurant versus office,” said Angie Conn, planning administrator for Carmel’s Department of Community Services. “It does not contemplate outside seating.”

“It definitely deters people,” said Allison Dalluege, manager at Upland Brewing Company. “Customers complain about it all the time, and people choose to go somewhere else as soon as they see the parking lot is full. There’s nowhere else to park. You can’t park on the street. We have even asked the landlord about converting some of the grassy area to the west into a parking lot, but they are not going for that. I think the other merchants have talked to them about that as well.” 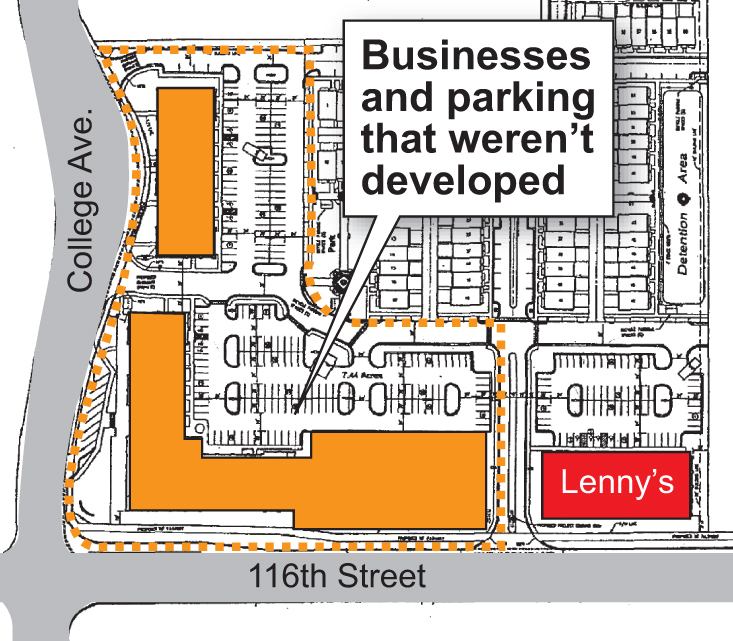 “We chose this location because we liked the grassy area to the east as a view for our outdoor seating, which was always a big part of our plan. I’m shocked that the parking formulas don’t take outdoor seating into account,” Dalluege said.

Joe Moore, co-owner of the MDG Salon echoed the sentiments of Wooton and Dalluege.

“We are trying to have a good relationship with everyone, and we want to believe that they (the landlords) are working to solve this problem. But it is a problem. We hear about it all the time. And I’m not sure why we couldn’t take out those two landscaping islands — why do we need those? That would add another eight spots. It wouldn’t solve the problem, but it would help,” Moore said.

And as far as the fact that outdoor seating is not taken into account in parking ratio formulas?

“That’s definitely an oversight in our zoning laws — that should be remedied,” said Carmel City Councilor Rick Sharp. “Outdoor dining has not been as pervasive in Central Indiana as it is in other metropolitan areas.”

“It’s very disturbing to me to read about how concerned the plan commission was with the Merchant’s Square parking situation,” Wooton said. “It seems pretty obvious there’s going to be plenty of parking for a movie theatre there. No one seems to be worried about these businesses over here. Come and look at our parking lot.”