You are at:Home»Lifestyle»Blueprint For Improvement»Replacing whirlpool tub with spa-inspired, walk-in shower 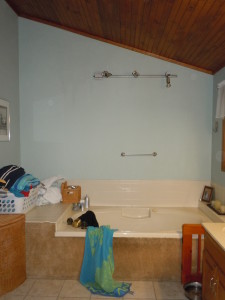 Existing master bath: This home located in the Hickory Woods neighborhood in Fishers was built in 1982. The home still had its original master bathroom.

“There was carpet on the side of the tub,” stated the homeowner. “The whirlpool tub wasted too much space and the tiny shower was stuck in a closet.” The homeowners were looking for a spa-inspired design with a significantly larger shower instead of the tub.

Tub removal creates walk-in shower: Removing the tub greatly increased the floor space, making room for a walk-in shower. 30 cm by 60 cm Stark Grigio ceramic tiles cover the shower walls, with the exposed edges finished with stainless steel edging. The shower floor was given the look of stone pebbles using Hampton Carrara Cobble. Frameless glass sits on the half-wall. The original small shower space was converted to a well-needed linen closet with painted french doors. Window film was added to the window for privacy, but allowing light to enter the space.

Light gray color tones: The homeowners chose light gray for the vanity, which complements the organic white quartz countertops. Contemporary styling of the fixtures and hardware align with the design as well. A hard wired electric towel warmer was installed right outside the shower entrance. Large floor tile in 18-inch by 18-inch Whisper Gray balance the room’s color pallet.

Decorative Ceiling: A vaulted ceiling originally covered in bead board provided an airy feel to the master

bathroom. However, the stained maple did not align with the new design. The wood was sealed to cover exposed knots, caulked along each seam and painted off-white.

Final Results: In the end, it was the functionality of the design that became the homeowner’s favorite.

“I like being able to turn the water on in the shower without having to get wet,” said the homeowner. “The placement of the valve was an important part of the design. I also like the new vanity height, which make the sinks easier to use. There is much more storage for us as well.”