You are at:Home»Current in Noblesville»(not) Home for the holiday

Crime never takes a day off and neither do police officers.

“It’s the way things are. Time off, especially holidays, are based on seniority,” said Boudreau. “We pair back a little bit so more people can have time off.”

Boudreau, an officer for four and a half years, will use his time off on Christmas Eve to celebrate with his wife and kids.

“We’ll spend the day together,” he said. “Our extended family is coming in on Christmas Day.”

Like any other day, officers never know how busy the holiday will be.

“In years past it has been quite. We respond when needed. Thanksgiving this year was livelier. It all depends,” he said. “I try not to let it hamper the day. You try your best to enjoy it.”

If possible, Boudreau would like to pop in on his family and be around for early morning gift opening.

“I’ll be in and out throughout the day. It’s a situational thing,” he said. “My kids see me in uniform more than without it on. They understand daddy has to work.”

As families gather around the Christmas tree opening presents, McIntosh will be several hours into her 12-hour shift on Riverview Hospital’s medical/surgical floor.

“I’m glad I’m not a patient, that’s a blessing in my opinion,” she said.

McIntosh is in her 43rd year as a nurse and has worked her share – and then some – Christmases.

McIntosh has three grown children and two are married.

“All we care about is being together and not going anywhere else,” she said. “With in-laws to see, it’s more fun for all of us to do it a different day.”

This year, the family plans to celebrate on Dec. 29.

“My family is just used to it. Any day can be Christmas,” she said. “I often volunteer for people that have little kids. We’ll trade schedules. It’s OK; it’s not a bad time to be here.”

McIntosh said the people and families who come to the hospital on Christmas are very friendly and appreciative of the employees.

Movie theaters are open every day of the year and that includes every holiday.

“Those that work in movie theaters love movies. We’re aware customers come out this time of year,” said Ross. “People who attend movie theaters have grown up going to movie theaters. It’s a tradition to see a movie on Christmas day or New Years day. The people who work here are those kids and they understand.”

To provide some time off, Ross said Hamilton Imax 16 closes early on Christmas Eve and opens late on Christmas Day.

“It’s busy,” he said. “Working at a movie theater on Christmas is really a lot of fun. The staff is in a good mood, families are in a good mood. The customers really make it worthwhile. They tell you, ‘Thank you for being open.’”

While it may be a packed house, Ross said movie goers have a jolly attitude and humanity. To add to the festivities, several workers bring in treats and food.

Ross, who has worked in the business for 13 years, said the first shows on Christmas begin around 3 p.m.

“Even with half of the show times off, we do a Saturday’s worth of business,” he said. “It’s pretty busy but that makes it fun too.”

“It was busy last year, that’s why we decided to do it this year. We noticed everyone closes early so people can go to church,” Lin said. “We were shocked (at the crowd). The crowd we got on Dec. 24 and 25 were mostly families and large parties.”

Lin is a Catholic, but her husband, Jet, who is co-owner and chef, is a Buddhist.

“We’re quite a mixture,” she said. ““I still teach my 4-year-old about Jesus and the meaning of Christmas along with her Christian preschool.”

Kobayashi will be open noon to 8 p.m. on Christmas.

“We’re open because my husband does not celebrate it and our family isn’t around town,” she said. “If my husband was Catholic we might be closed.”

While the restaurant is open, the holiday is not just another day.

“We give our employees who do celebrate Christmas time off. We’re understaffed for Christmas Eve and Day. We take that upon ourselves to do the work,” she said.

In addition to Christmas gifts, the Lins celebrate the Chinese New Year in late January by providing their employees with red envelopes.

“They’re given as thank you’s, a combination of each tradition,” Lin said. 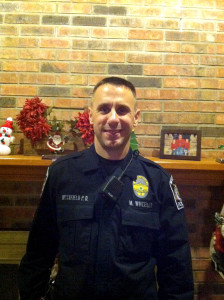 Donning a Santa hat complete with a Westfield Fire Dept. patch sewn on it, Anderson’s love for the holidays is easy to spot.

Anderson has been a Westfield fireman for five and a half years and has worked three Christmases at Fire Station No. 82, 1920 E. 151st St.

“One Christmas we invited all of our families for a big Christmas dinner. We pooled our money together and had a big feast with all the fixings,” he said. “Christmas day is time to do something together. Families love it and we love the company.”

The years Anderson has been away from his family have been difficult on everyone.

“My first thought is its rough for my family and four kids, ranging from 15 to 5. To them, not having dad on Christmas is a foreign idea. We had to do some rearranging like celebrating on Christmas Eve instead of Christmas Day,” he said.

Being on shift, Anderson said there are slow days and busy ones.

“Christmas is hard to tell what’s going to happen,” he said. “Bad weather like ice and snow affects how many runs you have. Christmas Day isn’t different than any other day.”

The workload may not be different for the holiday, but the attitude around the fire station changes.

“Every radio is on the Christmas station,” he said. “We hang up Christmas decorations and I wrapped the locker next to mine in Christmas paper. We’re pretty festive around here.” 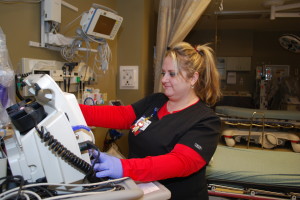 For half of Christmas day, instead of pajamas and new slippers, Green will be dressed in scrubs and caring for those in need of urgent care at Riverview Hospital.

Green, who does not have children, is a newlywed and plans to celebrate on a different day or after work.

“I’m trying to help out others with families. We help each other out,” she said about switching shifts. “It is part of the job. You learn to find a different time to celebrate. This is what we do.”

In her 12th year as a nurse, Green has become accustomed to working on holidays but being away on Christmas is still hard.

“Sometimes it makes me sad,” she said. “I know that I’m serving a purpose and it is a sacrifice. I’m doing a service for those in need and God has a plan.” 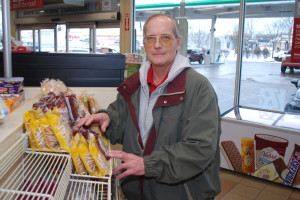 With so many stores closed for Christmas, gas stations and convenience stores are sanctuaries for those in need of small grocery items or those traveling in need of gas.

“Most people are gracious we’re open because they forgot something,” Schaefer said. “We have to be here so it’s better if we’re busy.”

Schaefer said the day has phases of customer patterns.

“First are the people who forget batteries, bacon or what they need for breakfast,” he said. “Then are the normal customers – the regulars – who come in for coffee and a doughnut every day.”

In the afternoon, either after lunch or before a big dinner, Schaefer said the gas station is “a place to go, for people to get out of the house.”

“Weather will determine how many people stay home,” he said. “If the sun’s out, even with wind and snow, we’ll be pretty busy. You wouldn’t think it.”

Schaefer, who has older and younger children, celebrates the holiday with a big breakfast before work.

“We let the younger ones open presents,” he said, adding his wife works at a convenience store too. “I work later in the morning so I don’t miss the big breakfast.”

Wheeler has served as a Westfield police officer for 14 years and has spent 10 Christmases away from his family protecting the city.

“More times than not I’m working Christmas Eve and Christmas Day,” he said. “I’ve grown accustomed to it.”

While Wheeler is used to it now, being away for the holidays was a transition in the beginning.

“The first couple of years were an adjustment. I was starting my job and my family. It was rough not being around with newborns or young children,” he said.

Wheeler said he spends time with his family when he can on Christmas Day.

“If I work night shift I’d lose sleep to spend time with my family,” he said, adding since he works the holidays he’ll have a couple days off before or after Christmas. “I don’t want to inconvenience anyone. It’s part of the job. There are a limited number of people who can take the time off.”

To celebrate the holidays, Wheeler said those on patrol meet for a pitch-in meal and small gift exchange. Those on duty also don’t know what Christmas will entail – like any other day.

“There are times we’ve gone to work and not taken a single call,” he said, adding sometimes families who haven’t seen each other in a while have too much food and alcohol. “It depends on how everyone decides to act.”

Wheeler said officers understand when they are hired on that they work 24 hours a day, seven days a week and that includes holidays.

“It’s the families who get frustrated by it more so than the officers themselves,” he said. “You get used to it because of the job you may have to work.”