You are at:Home»Current in Fishers»Deputies shop with kids 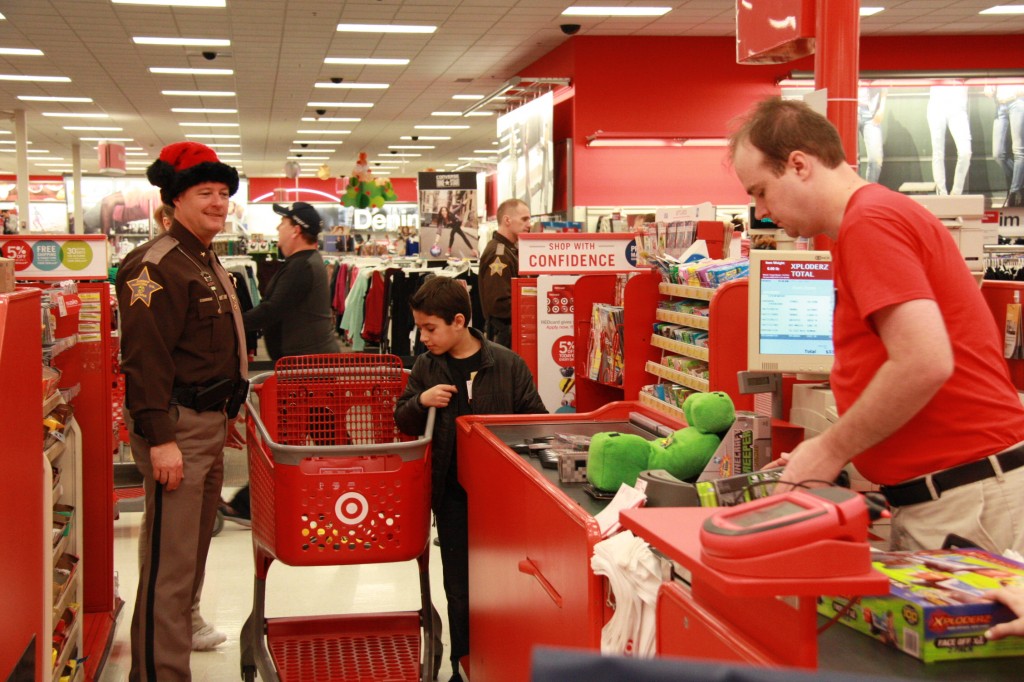 The day of the fifth-annual Hamilton County Sheriff’s Office Shop for Kids event, Sheriff Mark Bowen and his deputies bubbled with the same excitement as the kids they sponsored.

Held Dec. 14 at Target in Fishers, 38 youth ages 2 to 17 were each awarded $100 to spend on clothes, supplies and toys of their choosing. The recipients were largely selected by the Good Samaritan Network of Hamilton County, which supports at-risk individuals and families in Hamilton County.

Hamilton County Sheriff’s Deputy Todd Green came up with the idea of Shop for Kids in 2008. For him, the event addressed a need he saw in his community.

“I’ve been working in this county so many years, it’s hard to see (poor families) struggling.” He approached his boss, and together they began the process of forming a nonprofit, which paved the way for Shop for Kids. The ranks have swelled from 20 recipients the first year to this year’s 38 – the largest number of recipients to date. It is largely funded by businesses and private donations.

Each officer had his own spin on what the Shop for Kids event symbolized. Deputy Kevin Fessel, a 19-year veteran of the force, escorted two kids this year in his squad car. In addition, he brought his own kids, like many of the other deputies.

“It’s really rewarding … it’s a good life lesson for (our) own kids,” he said. Fessel viewed the program as a welcome break from the rigors of his job.

“In this line of work, we don’t always get to do these kinds of things, so it’s personally gratifying for us,” Fessel said.

Deputy Dustin Dixon, who has been on the force 12 years, said he sees this event as a way to influence public perception of law enforcement.

Bowen, happily shepherding 9-year-old Cole Elisea through the toy aisle, said, “It’s as exciting for us as it is for the kids. We’re all kids at heart.”