You are at:Home»Current in Fishers»Students learn about Billericay 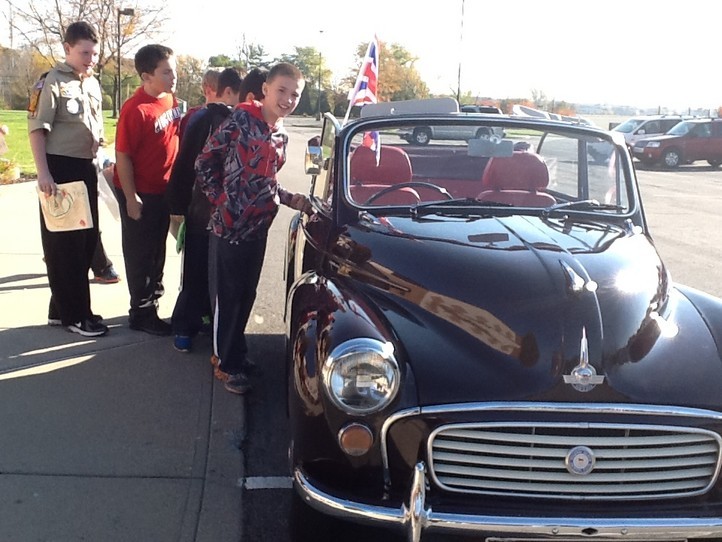 Levin Wann, Sam Reagan and Kaleb Harris, fourth-graders of Hoosier Road Elementary School, check out the intriguing location of the steering wheel in an English car.

Billericay Park in Fishers is a popular place known for its playground and woods, plus the Splash Pad and, of course, the outstanding baseball fields. But how many people know that Billericay is named for a town in England? Billericay, located in Essex, England, is a Sister City to Fishers though the Sister Cities Association of Fishers.

“The kids that I teach would talk about playing ball at Billericay and they didn’t know why we have the name Billericay,” Hill said.

Hill was inspired to have her students learn about the connections between Billericay, England and Fishers.

“Through Doug Whisman at SCAFI, I made contact with a high school student who was visiting Billericay and she was able to get a contact person for me there,” she said.

Hill and the Billericay teacher decided to create a traveling art show. Hill’s fourth-grade students recently sent a collection of art projects to Buttsbury Junior High, and Hill said that artwork will arrive soon from the students in England.

“What I’m trying to do is show the students they can have a partnership with these kids in Billericay that can last long after they’ve left HRE,” Hill said.

Doug Whisman is vice president of SCAFI and agreed there are many benefits to Hill’s students learning about Billericay.

“It gives them exposure to another culture and another country as well as connects them to another community,” Whisman said.

The woods at Billericay Park are named Norsey Woods, and there is a Norsey Woods in Billericay, England. Whisman mentioned this fact when he met with Linda Hill’s students.

“The kids are fascinated by Norsey Woods,” Whisman stated. “They had no idea it is named after a woods in England and it helps show them the world outside of school.”

Hill hopes the relationship between the two schools continues.

“The kids seem to really enjoy it,” Hill said. “What I find interesting now is that when the kids see Billericay Park, they know what the name means and they understand the connection between Fishers, Indiana and Billericay, England.”