You are at:Home»Current in Carmel»Carmel Community»West side could get new school 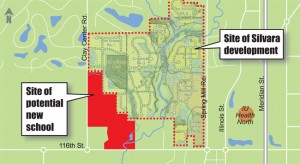 The developers of the proposed Silvara housing development at 116th Street and Spring Mill Road went before the city council Nov. 18th seeking to make changes to their site plan. The reason? Accommodations for a potential new school to the south.

The land was approved for purchase by the school board at its November 2012 meeting on an installment land contract from Scott Jones, the creator of ChaCha. The deed is in escrow until the final payment.

“We thought (a school) would be a good addition to the area,” said Lawrence Moon, executive vice president at Republic Development, the company planning Silvara.

But Carmel schools has no definitive plans for the property at this moment.

“The property was purchased in the event there is a future need,” Assistant Superintendent Roger McMichael said. “There is no identified need at this time.”

He also said the developer did not need to make accommodations for the school district’s benefit due to the possibility of a school to the south.

“The developer may want to plan for access to the school for walking and or bike paths, which would benefit the homeowners,” McMichael said.

Silvara is one of several planned developments in the part of Carmel west of U.S. 31 that will likely increase the city’s population in the coming years.

But when the school district decides to build or the city council decides to approve changes to the community’s site plan, Silvara’s developers would be happy to have the addition to the neighborhood.

“We are in favor of schools,” Moon said.