You are at:Home»Current in Carmel»Carmel Community»‘Circus’ a wonderful Indiana experience 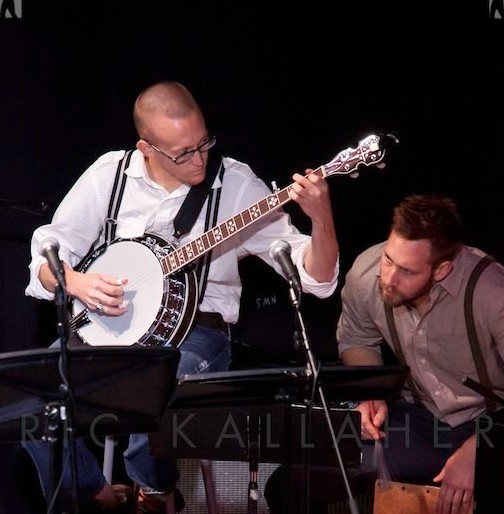 Joe Young, left, plays the banjo as Nick Rapley plays the cajon – a percussion instrument – during rehearsals for “The Circus in Winter,” a musical written by Ball State students with original bluegrass, country and rock songs by Indiana-native Ben Clark. (Submitted photo)

Carmel Theatre-goers will be in for a treat when Actor’s Theatre of Indiana presents an exclusive engagement of “The Circus in Winter.”

The musical is based on a novel by Indiana novelist Cathy Day that details the history of a traveling circus that wintered in Peru, Ind.

The script was crafted by 14 students in theatre and dance professor Beth Turcotte’s immersive learning class at Ball State University.

Based in the fictional 1930s town of “Lima” in the production, the story unfolds to tell the tale of a community that came together to build the circus, the man who later purchases it and the tragedy he must overcome along the way, Turcotte said.

“The music is the highlight of the experience,” she said.

Set to original music and lyrics written by Indiana-native Ben Clark, fans of bluegrass, country and rock music are sure to come away impressed. And they won’t be the only ones.

“The Circus in Winter” has been gathering praise and recognition around the national awards circuit, and several New York producers are hoping to guide it to a larger audience, Turcotte said.

A film crew from the university is also following the production around to create a documentary tentatively titled “From Ball State to Broadway.”

But perhaps the most intriguing part of the Carmel performance will be the chance for the audience to give feedback to the actors, writers and producers following the show.

“It’s going to be an exciting opportunity for people to possibly affect a show that could end up on Broadway,” said Actors Theater Artistic Director Don Farrell.

Turcotte said it’s an opportunity to let the creators know what made sense, what didn’t and just give honest feedback from an audience.

“But there’s a lot of humanity in it as well,” Farrell said.

That was the part Turcotte said her students enjoyed the most about writing the musical – the chance to do research with the circus people in Peru and meet the author who is now a Ball State professor.

“It’s been a wonderful Indiana experience for all of us,” Turcotte said.

“The Circus in Winter” ● 8 p.m. Dec. 18 ● The Studio Theatre ● The Center for the Performing Arts in Carmel ● Tickets are $15 ● For more information call 843-3800 or visit www.thecenterfortheperformingarts.org