You are at:Home»Current in Fishers»Swimming Tigers make a big splash 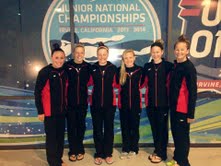 “We’re land animals, trying to compete in the water.” That’s how Jay Sanders, head coach for the Fishers Area Swimming Tigers, the feeder swim club for Fishers High School, defines the unique dilemma swimmers face, unlike other athletes. Since the club’s inception in 2006, the club has grown to more than 200 members from ages 5 to 18, with a lengthy string of recent accomplishments under its belt.

To date, Sanders says no other swim program in Indiana has had their level of success: In 2012, USA Swimming, the national swimming governing board, acknowledged them as a top 40 program in the nation. They placed second in the Indiana Age Group Long Course championships in July, two swimmers have achieved Olympic trial cut times in several events, eight state meet records have been broken, and FHS freshman Lauren Edelman earned a spot at the National Select Camp, where the 60 fastest under-18 female and male swimmers in the nation learn to boost their skills.

To what does Sanders attribute this high level of success? He acknowledges the “beautiful facility” at FHS, which hosts six to seven swim meets each year.

“We meet more than any other club, which gives us a competitive advantage.” He said this exposes novice swimmers to a competitive atmosphere, which raises their game.

“My under-10 coaches are so skilled, it’s like Ph.D’s teaching first grade. My coaching staff is unbelievable.”

Sanders admits to being a tough and demanding coach and setting high expectations for attending swim practice. He believes it’s determination that distinguishes his national competitors from the rest.

“A few years ago, they didn’t want to miss the Lady Gaga concert [for a swim practice]. Nowadays, they’ll attend the practice, and go late to the concert.”

To learn more about the Fishers Area Swimming Tigers, contact Jay at coachchambers@fasttigers.com.