You are at:Home»Current in Carmel»Carmel Cover Stories»A day in the life of Carmel’s football team 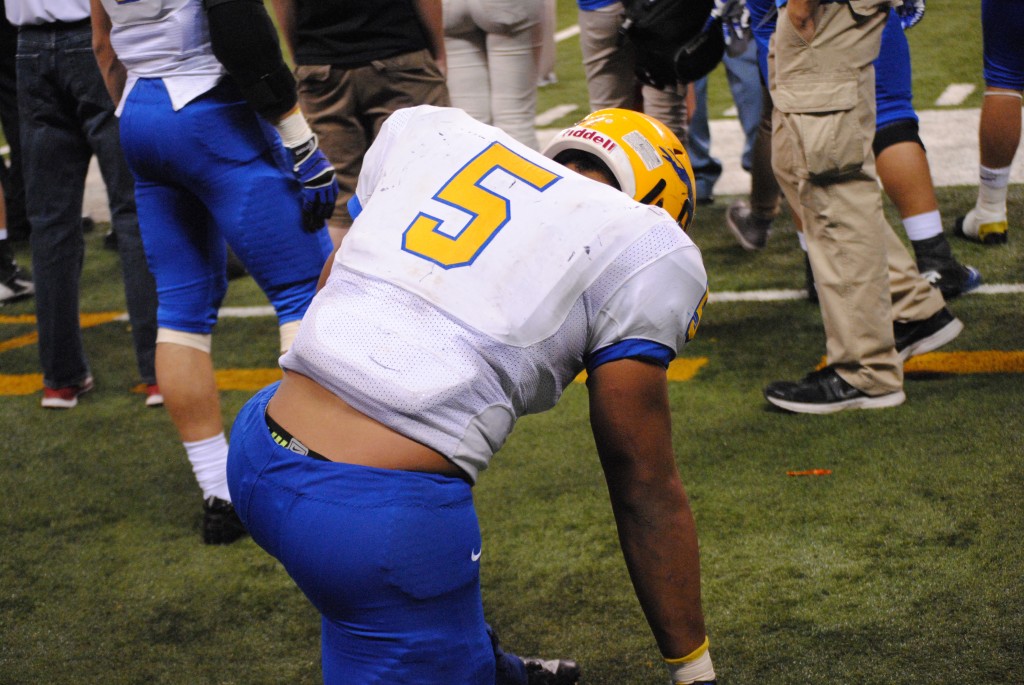 Shakir Paschall, No. 5, pauses to say a prayer after Carmel lost to Warren Central 7-6 in the Indiana High School Football 6A championship game Nov. 30 at Lucas Oil Stadium in Indianapolis. (Staff photo by Pete Smith)

Under the bleachers at Carmel High School’s football stadium and deep in the recesses of its upperclassmen locker room hangs a banner that reads: Blame no one, expect nothing, do something.

Painted prominently on the wall is the mantra: No excuses.

It was here that coach Kevin Wright rallied his team after they were done dressing, getting amped up listening to loud rap music and quietly preparing for the task ahead.

But Wright didn’t break out a dry-erase board and start talking Xs and Os. He didn’t talk about the keys to the game or playing hard.

With the state championship game more than two hours away on the field the Colts bleed on, he had time. So he used it to address what was on everyone’s mind – the death of the starting running back’s father two weeks prior as he watched his son help Carmel win its semi-state matchup against Penn.

And so they decided to recognize Eric Paschall – as individuals and as a team – by grabbing EP stickers out of a box and placing them on the back of their helmets as they spilled out of the locker room and onto the buses bound for Indianapolis.

Adults can live the life Carmel with a feeling of power, prestige and privilege – and even if they don’t, outsiders will readily project that sense of privilege onto them.

But the children of Carmel never made the choice to move here. And the side effects of Carmel’s position are often manifested in the form of lofty expectations.

Not their own expectations, but those placed upon them by parents, teachers and others. Combine that with the fact that prior to the 2013 season, the Greyhounds football team had made it to the championship game five out of the past seven years, and it would be easy to take the fact that Carmel was back at Lucas Oil Stadium for granted.

But the truth of this Greyhounds team is much different.

After starting the season by squeaking past Tech High School 6-2, two early losses to Louisville Trinity and Center Grove had many people thinking this year’s Carmel team couldn’t walk in the shadows of the teams that came before.

“We don’t have a D1 (college recruit) kid on the entire defense,” Greyhounds defensive coordinator John Herbert said of this team’s lack of God-given talent. “They’re just smart, tough and work hard. They play really hard for each other.”

And as that sense of playing for each other coalesced after the fourth week of the season, the wins began to come.

“There is something special about how this team has come together, even before (the night Eric Paschall died),” Herbert said.

If this team was forged in the trenches, the night of Nov. 15 is when it hardened.

Despite overcoming the emotion of watching a referee almost die on the field, the Greyhounds ran over undefeated No.1 Penn High School in their semi-state matchup. But it wasn’t until after the game that junior running back Shakir Paschall and coach Wright heard that Eric Paschall, 40, had been taken to St.Vincent Heart Center at 106th Street and Meridian.

He had diabetes and a history of seizures, but he had a faint heart beat when he was driven from the stadium, and the family was hopeful because the medical staff had worked on him for more than two hours, Wright said.

“I’ll never forget, so long as I live, when the lady came out and just shook her head,” he said.

A side effect of the recent area hospital layoffs is that there are no chaplains or support staff anymore, Wright said. So when she said she was sorry and left, then there was nobody.

At about 12:45 a.m. coaches and players started slowly showing up after getting the news through a network of text messaging.

Everyone just sat in the hospital’s chapel at the hospital, the silence punctured every 20 minutes with screams and outpourings of emotion as more people arrived, Wright said.

The players all attended the memorial service Nov. 20 at New Life Worship Center in Indianapolis as a team.

The attendance at the service showed that Eric Paschall was a person that a great many people loved, Wright said.

“It helped put things in perspective,” he said.

Eric Paschall had been an assistant coach on Wright’s 2003 Warren Central team that won a state championship. Shakir had been a ball boy on the team.

This wasn’t something he could just move past.

‘Punch him right in the throat’

“Victory isn’t a real resolution,” Herbert said prior to the championship game. “But the kids understand it’s what we have in front of us. It’s the best we can do.”

And with a new focus and intensity, they began preparing for their opponent – longtime rival Warren Central.

The Warriors are a familiar foe, but the emotions of the past week had perhaps worried the Warren Central coaches.

So worried that Warren Central felt the need to arrive to Lucas Oil Stadium early the night of Nov. 30 and allow players in the tunnel leading to the locker rooms in an attempt to intimidate the Greyhounds team that had defeated them earlier in the season.

“In the shadows there was a Warren coach lurking,” said a Carmel coach in a pre-game speech. “I started laughing. He’s a chump. He’s weak inside.”

“You’ve gone through things that have forced you to grow up as men,” that coach said. “You go out there and punch him right in the throat. He will cower like a coward.”

“Everything that’s been put in our way, we have overcome,” Wright said following the other coach’s speech.

Wright even referenced former Carmel coach Dick Dullaghan ignoring Carmel all week prior to the championship for motivation.

“He said, ‘This is the best defense (Warren Central) has ever had.’ He said nothing about us.”

“This decal on the back of your helmet means something,” Wright said. “This is when you decide what it means to be a brother.”

And with that the Greyhounds rushed out of the locker room, into the tunnel and took the field led by Shakir.

During the first quarter, the Carmel crowd cheered loudly every time Shakir carried the ball, bullying his way between the tackles.

But it was the Carmel defense that really put on a show, denying the Warriors any hint of success.

Carmel took a 3-0 lead in at halftime; a lead that was almost larger had Shakir not been stopped short on a fourth down attempt inside the Warriors’ 5-yard line.

But it was a series of three consecutive plays in the third quarter that defined the course of the game.

When Carmel fumbled the ball deep in its own territory, Warren Central recovered at the 18-yard line. A quick Warriors pass into the end zone was deflected by a Carmel defender, but a Warriors receiver managed to haul it in for a touchdown and take a 7-6 lead.

Receiver Austin Roberts, who committed to play for UCLA,  said before taking the field on the ensuing kickoff, “We are not pulling no Denver Broncos here.” He was referencing an epic collapse by the Broncos just the week before.

And with that, Roberts proceeded to blaze a hole through the Warriors special teams and take the kickoff all the way down field for a touchdown.

A touchdown that would have decided the game had not an official called back the return on an unnecessary roughness penalty.

The Greyhounds fought to retake the lead the rest of the game – even blocking a Warriors field goal attempt – but the team eventually ran out of time.

It was the rare time when a team can completely dominate another and still lose.

An unheralded defense with undersized players kept its opponent from driving into the red zone all game. An offense that had little trouble running up the field between the tackles didn’t have enough time to mount a comeback.

After Warren Central ran out the clock, the Greyhounds players stood in shock for a minute before running out to shake hands with the Warren Central players.

Shakir stayed on the sideline longer than most, taking the time to kneel and say a prayer under the rafters that his father, a welder, helped to construct.

And as the team shuffled into the locker room to get undressed, Shakir took a moment to run to his family and share a brief embrace.

Outside the locker room, players and coaches lined the walls in a funereal silence before walking quietly and composed back to the buses.

And while the sting of defeat hurt, in time perhaps they’ll realize that they did the hardest thing for any child of Carmel to do – rise above expectations.

Coach Herbert has been a teacher at Carmel for 18 years and a coach for 16. He said, “In a lot of ways, it feels uniquely like the best year.”

Coach Wright was the last to leave, walking alone down the long corridor underneath Lucas Oil Stadium. Prior to Nov. 30 he had been to four championship games – and won them all.