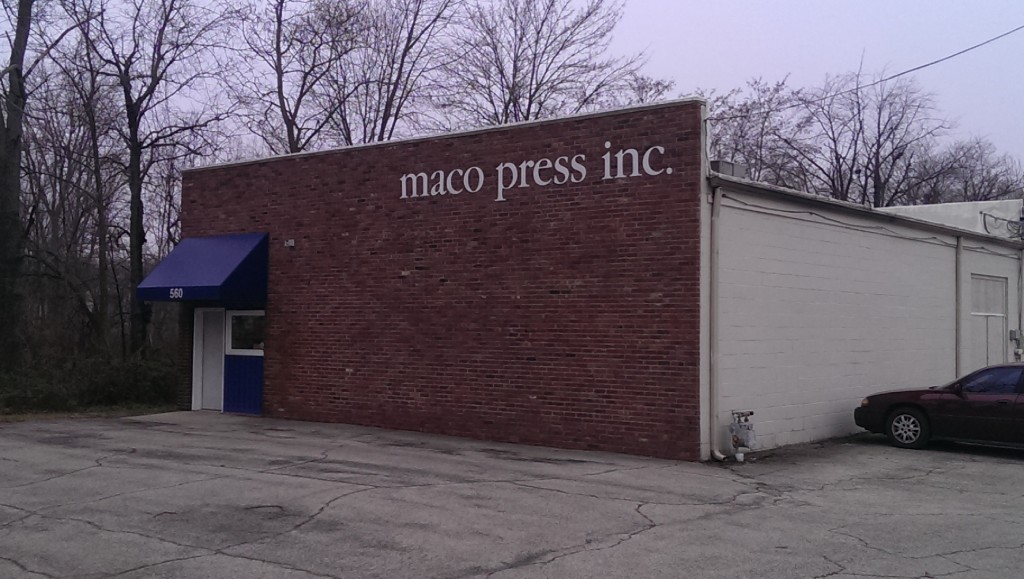 Each company also will be added to the organization’s Historic Business Register.

Maco Press is located in a nondescript building on 3rd Ave. SW in the shadow of the Palladium in Carmel’s midtown.

And what it lacks in architectural flair, it makes up for in stability.

“We celebrated 100 years this year – it’s a big deal,” said owner George Seidensticker. “Not a lot of people make it.”

In fact, only a little more than 400 Indiana businesses have reached their centennial according to the Historical Society.

Maco was founded by Al Brandt in Indianapolis after he bailed out of the floral and pet-shop businesses when neighboring merchants asked him to create print jobs for their businesses, Seidensticker said.

Maco made an initial foray into Carmel in the early days of the business. But unhappy with the outhouse situation in Carmel at the time, Brandt’s wife insisted the family move back to “civilization” in Indianapolis.

Brandt’s son Norm took over the business after World War II and Seidensticker purchased it in 1971, even keeping Norm Brandt on as an employee for 3 years after.

Maco Press focuses on commercial printing. It’s a testament to the power of customer service in that it employs no sales force, relying instead on its solid reputation for survival.

Well that and a stable of loyal clients like The Penrod Society.

“You gotta be a little lucky and reasonably competent,” Seidensticker said.

He also credits Maco’s longevity to conservative management, noting that he never embarked on any large-scale expansion plans and never leveraged his business in any way.

In 1992, the trustees and members of the Indiana Historical Society founded the Historic Business Register with three goals in mind: to provide special recognition to Indiana companies continually in business for a century or more, to encourage the preservation of historically significant business-related archival materials and to develop increased awareness of our rich business and industrial heritage among Indiana’s citizens.

To date, the names of more than 400 companies have been registered and listed on the historical Society’s website, most with organizational narratives.