You are at:Home»Current in Westfield»Mistake-filled start ends Westfield’s journey

The Westfield Shamrocks ended its season Friday with a State Runner-up title. (Photos by Robert Herrington)

“The Journey is more important than the prize!” That’s what an inspired crowd heard Coach Jake Gilbert tell them in the high school auditorium at Friday’s pep rally. He also went on to say “but make no mistake about, these boys want that prize as well!” Unfortunately, later that night at Lucas Oil Stadium the Rocks’ journey ended without the 5A state championship trophy.  Cathedral 42, Westfield 18. 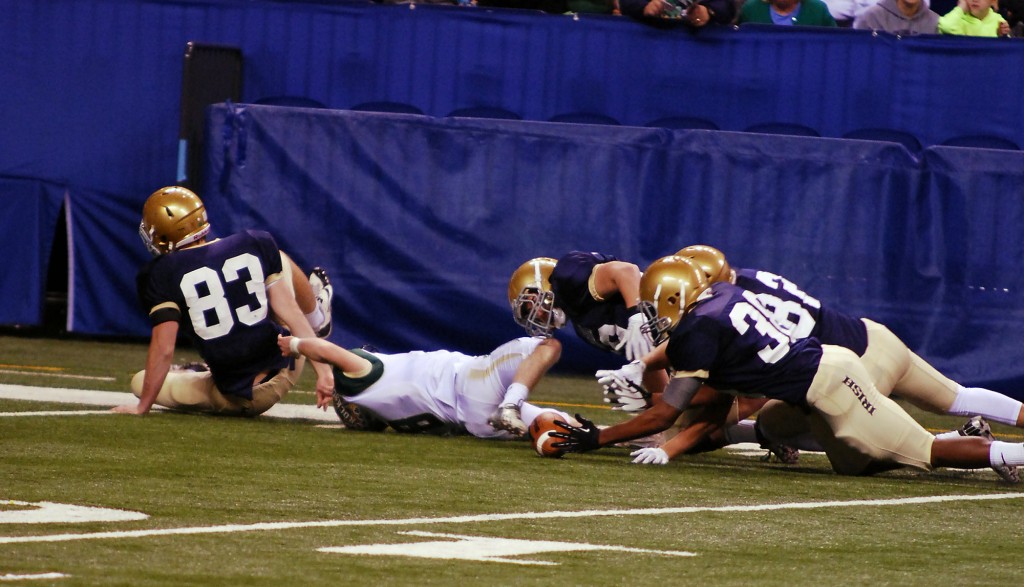 A fumbled punt set Cathedral up inside the Westfield 10-yard line and the Irish’s first touchdown.

(Confessions of this writer: I helped Carmel win a state championship in 1989 at the Hoosier Dome. Played some college ball. Lived in Hollywood for 5 years. Seen a few things in life. My address is Carmel, but my utilities and taxes are Westfield.  Oh, and I have a nephew, Junior Jake Robinson, who has helped this Shamrock team win 12 games.  Having experienced the thrill of a state championship, I wanted SO BADLY for my nephew and this inspiring group of young men to get that 13th victory and experience the same thing!!! (Damn—tears welling up a bit now?!?) So you get me? I’m a homer as I write this piece. You don’t like it? Well, I suggest you pick up the Current in Cathedral if there is oneJ)

So, as I stood on the sideline Saturday night awaiting the kickoff, camera in one hand and pad of paper in the other, my heart was pounding a bit faster.  The lights were bright and the crowd was amped. Just a few hours earlier, Coach Gilbert had aroused an auditorium crowd to frenzied proportions in sending off our young men to what was going be Westfield’s 1st state championship!  “WHO ARE WE?…..WESTFIELD!” We all screamed as the team left the stage for their buses.  “WHO ARE WE?…..WESTFIELD!” I was recalling the chant as I stood nervously for kickoff.

And then….BOOM….the ball was in the air.  Cathedral didn’t return it for a TD, so the heart settled a bit. The game actually started out ideally as the Rocks forced the Tradition that is Cathedral into a quick three and out. Unfortunately, we weren’t prepared for the Thor-like punt that was to follow as Cathedral’s Joseph Schopper blasted a 60+ yards into the Lucas Oil lights.  I still want to check if that was helium in that football!

Speaking from experience, I can tell you fielding punts in a dome is much harder than your regular high school stadium. And when the ball is launched the way this one was, well, it’s darn near impossible. As you are probably deducing, the Rocks muffed the punt and just like that Cathedral had 1st and Goal at our 7 yard line. One play later, the Irish’s Caleb Cross ran it in. 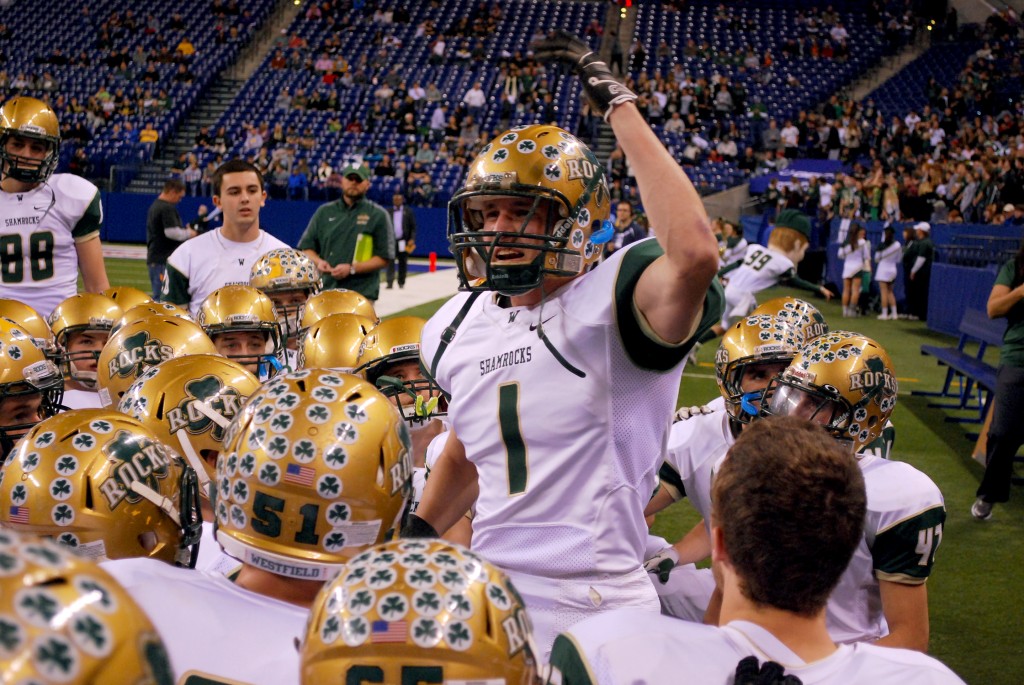 Senior Luke Peters fires up the team prior to kickoff.

My heart back to fluttering, I ran behind the end zone to photograph the extra point.  And as I did, I screamed to our defense only a few feet away “That play is over! Shake it off!” On my way, I guess I ran in front of some sloth-shaped photographer sitting on the field who annoyingly said, “This ain’t the place for cheering!” Gulp! My heart was now on fire! As I knelt next to this guy to take a snap shot, I was fuming!!! It took all of my efforts to be self-controlled and not lean over and offer him a knuckle sandwich.  But I thought to myself, this is a long game and I’ve got to keep my cool!

The Irish made the PAT and I kept my cool.  And I prayed that our Rocks would do the same.  Keep their cool! They had just made one mistake. It’s a long game, now please, please respond to this one and don’t make any more!

The Rocks didn’t hear my prayers. With the kickoff seemingly going out of bounds, which would have been a penalty and good field position, we somehow fielded it and accidently stepped out inside our own 10. Heart-rate increase again.

Down 7-0 early in the 1st and having made two huge blunders already, it was not the start Westfield wanted.  Even so, I knew we could respond, we had done it all year long. So when Nick Ferrer and Elvin Caldwell led the Rocks down the field on this drive that started inside the 10, calmness began to settle in. The Rocks easily moved the ball to the Irish 21 yard line and had 1st and 10.

Having leaned on the run and safe passes for most of the drive, the Rocks went with a deep play-action on 1st down. Ferrer’s pass in the end zone to Ben Loftfalian was tipped into the hands of Cathedral’s Terry McLaurin. Mistake number three and we weren’t even half-way through the 1st quarter! Time for a heart pill!!

Well, great teams take advantage of those mistakes, and let’s face it, Cathedral is a great team. The Irish quickly moved on this drive and McLaurin got free for a 41 yard TD reception to put the Rocks into a 14-0.  At this point in time, my heart was half-way broken, and I knew our Rocks were too.  I could see the emotion fall right out of them after that play.

But, honestly, I thought ‘Okay, okay! This is BAD, but we have a great coach. We have moved the ball at will on the Irish.  We are 12-1. We’ve played at Lucas before.  We can still do this!!’

And those hopeful thoughts were fueled for a little while. After surviving bad field position thanks to another God-like 65 yard punt by Schopper, the Rocks traded punts with the Irish to start the 2nd quarter. Trailing 14-0, the Rocks marched to the Cathedral 7 yard line midway through the quarter, but had to settle for a Nick Dowd field goal. A touchdown would have been better, but we had life!

I think I mentioned earlier, Cathedral is a pretty good outfit. There’s a reason they’ve won 10 state titles and were well on their way to an 11th. After the field goal, the Irish took the ball from their own 25 yard line and methodically moved down the field.  The Rocks seemed a bit fatigued and honestly, I can’t blame ‘em. A lot of emotion had been spent on those mistakes and fighting back.

Caleb Cross scored his 2nd TD of the game, scampering in with 3:32 left in the half. The PAT made it 21-3. The hearts of Rocks fans sank once again. The two teams traded possessions to end the half and the Rocks went into the locker room looking to regroup.

While the pulse was slowing drastically, the Rocks were not dead yet. We would have the ball to open the 2nd half. And we had one of the best offenses in the state. The Rocks moved easily at times on the Irish in the 1st half and had totaled 172 yards of offense. With a turnover and some similar offense resulting in touchdowns, we could do this thing!

We took the opening possession of the 2nd half at our own 27 yard line. Rocks fans’ heart rates came back to life a bit as we moved all the way to the Irish 35. We score a TD and make it 21-10, anything can happen, I was thinking. Unfortunately, we couldn’t convert a  4th and 3 and turned it over to Cathedral.

The Irish didn’t play their part as Choke Artists in the 2nd half.  Instead, they took the ball right down the field on the Rocks as they did at the end of the 1st half. The Ohio State-bound McLaurin raced 28 yards to make it 28-3 with 6:49 left in the 3rd.

My heart, and the hearts of many Rocks fans were now on life-support. The Rocks needed a miracle that unfortunately would not be granted. There were some pulsating moments left however.  Elvin Caldwell, who finished with 114 yards, scored in the 3rd. Ben Loftfalian caught the 2-pt conversion that made it 28-11. But the Irish scored twice more to put the dagger firmly in our hearts, going up 42-11.  Ferrer ended the scoring with a one yard plunge as the game came to an end.

As the teams shook hands crossing mid-field, I again faded back to six hours earlier and the hope that once was. “WHO ARE WE?…WESTFIELD!”  Despite the loss, the Shamrocks have little to be disappointed about. The team contributed to its mistakes in that first half. It wasn’t one thing that did it, but several things, by several players. Sometimes that just happens to a team.

Realistically, after seeing Cathedral, I can say the Rocks are not a better team than the Irish, and certainly not on this night. Could they have beaten the Irish? Absolutely! Just not on this night. But I can also say that the Rocks are a better team than any other in the history of the Westfield program.  And it’s because of those young men, and their efforts, that my heart raced and my skin goose bumped when screaming “WHO ARE WE?…WESTFIELD!”  this season. And those warm feelings will forever be remembered.  That’s a prize too! Thanks Rocks for a great journey!!!