You are at:Home»Current in Carmel»Carmel Community»Colts to honor brave Carmel girl 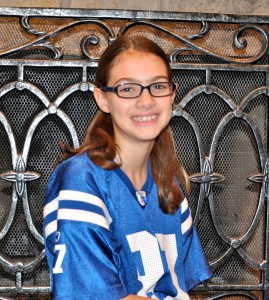 When the Indianapolis Colts take the field Dec. 1 against the Tennessee Titans, 10-year-old Brooke Barbato will be right there with them. The West Clay Elementary School fourth grader has been selected to serve as a Riley Coin Toss Kid for the game and will stand alongside the team captains during the pre-game coin toss ceremony.

“I’m really excited because nothing like this has happened to me, and I want to thank them for choosing me,” Brooke said. “I get to go there in a limo with my family and go on the field. I think that is really cool.”

While an once-in-a-lifetime opportunity for Brooke, the reason behind her selection was one of the scariest moments for her parents, Gina and Robert Barbato.

“She was rollerblading at the end of September in our cul de sac and she fell. And at the time we thought it was just a laceration on her chin. It wasn’t until we got to IU North that a CT scan showed she had dislocated and fractured her jaw,” Gina said. “They transferred us to Riley because they didn’t have a specialist to handle that kind of injury, and she had surgery the next day.”

Surgery that left her jaw wired shut for seven weeks.

During that time she couldn’t eat solid foods – everything had to be swallowed through a straw.

“I was just upset because I couldn’t eat and couldn’t ride horses or do some activities in school and could only walk at recess – no running,” Brooke said. “It was kind of frustrating because of the things I like to do, but it got better.”

“It was the first major injury any of our kids had ever had so it was very emotional for us as parents,” Gina said.

The Riley Coin Toss Kids Program is one of the longest running partnerships for the club. Every season at each home game, pediatric patients are honored for their courage to overcome obstacles with a positive attitude.

“When we found out Brooke’s initial reaction was: ‘Why pick me when there are kids so much sicker than I am,’” Gina said,  “I wrote a friend of ours who said a lot of it is focusing on wellness and not just the sickness, and that gave her a perspective.”

Brooke’s recovery is ongoing. She will be monitored to ensure her jaw on each side is growing simultaneously and she will likely need braces as well as cosmetic dentistry to fix four broken teeth.

Despite all that, watch for Brooke to be smiling brightly Sunday in her Andrew Luck jersey as she takes her place for the coin toss.