You are at:Home»Current in Carmel»Carmel Community»The Show Must Go On 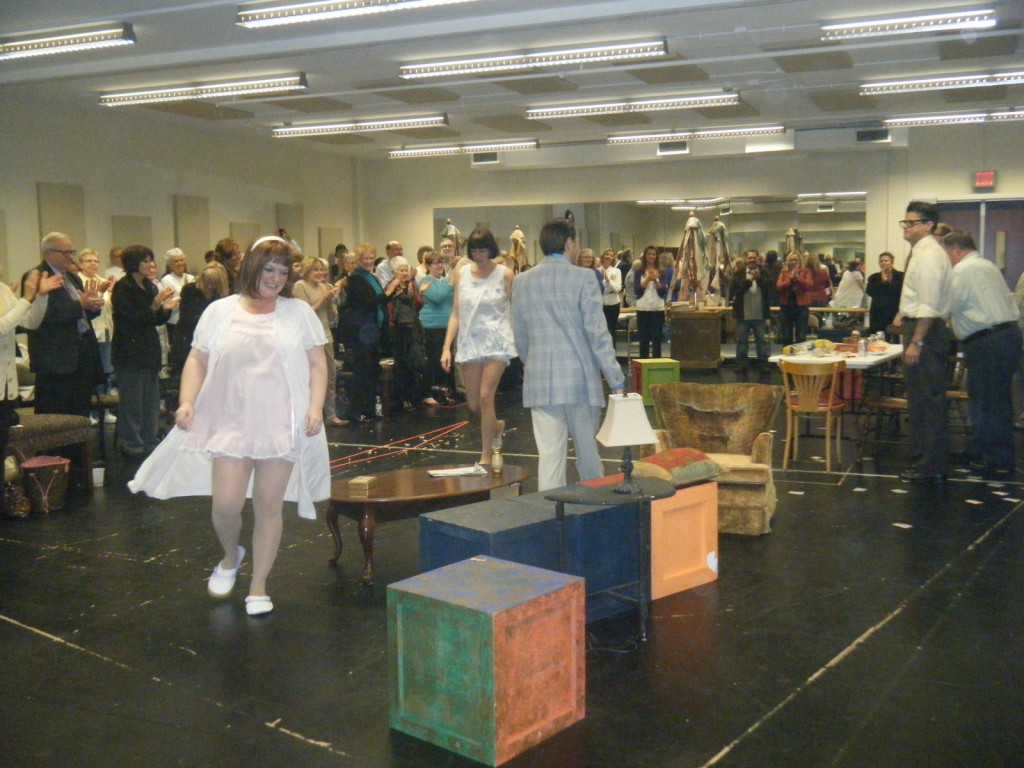 The actor in the “The Odd Couple” staged their performance in the basement of the Civic Theatre after the play was delayed due to inclement weather Nov. 17. (Submitted photo)

Neil Simon’s Tony Award winning Broadway classic “The Odd Couple” — about two bachelors sharing an apartment in 1960s New York City — ended its run in at the Studio Theater as high winds and tornados fanned across the state Nov. 17.

As the matinee audience enjoyed the show in the sound-proof environs of the theater, management was keeping a close eye on the weather reports.

As Oscar Madison, played by Don Farrell, delighted the audiences with this sassy behavior towards Felix Ungar, played by Bradley Reynolds, an announcement came over the PA system: “Ladies and Gentlemen, may I have your attention. The city of Carmel has activated a severe weather alert system. Please follow the ushers and technical staff in single file to the safety room.”

“I thought it was a part of the show until then I saw the actor’s faces. I knew I’d better follow the directions. There was something to be concerned about,” said Erika Chaney, a member of the audience. Unaware of the threat of bad weather, she had traveled from Fortville with a friend from Anderson to see the show.

The audience was led to a large, windowless space belonging to the Booth Tarkington Civic Theater among props and behind-the-scenes storage. And the wait began.

Like many others, Judy Perk of Carmel called her husband, Dick, to make sure he was safely in the basement with the family pets. Then she visited with the actors.

Meanwhile Erika and her friend Justin Hersberger made the best of the impending delay by playing cards.

The actors, in full make-up and costume, answered questions, signed autographs, shared stories and waited for updates with crowd. They were it together.

Snacks from a staff and crew party from the night before arrived, followed by more food and beverages. The conversation shifted from “How long are we going to be here?” to “Can I have the recipe for the Chex mix?”

The crowd laughed and clapped as the stage was recreated.

“This rectangle table is now the round poker table. These wooden boxes are now the couch, the exit door is now the kitchen, and since we cannot throw food against the wall we’ll improvise….”

The audience became a part of the play. They were in the apartment with Felix, Oscar and friends. They were invested. The end of the performance brought a standing ovation, cheers, high fives and many hugged the performers.

“You never know what is going to happen,” Farrell said. “We have a game plan in advance. We know what to do in case of an emergency, though we never expect to put those procedures in place. At some point, things are out of our control. The audience was willing to follow along the roller coaster.”