You are at:Home»Current in Carmel»4CDC board gets new leadership

The departure of two of the board members of the Carmel City Center Community Development Corporation will apparently have little impact on the organization. Their replacements have already been found.

Carmel Mayor Jim Brainard appointed John Ragland, a retired banker and Carmel resident, to the board at the most recent meeting Nov. 12.

Ragland is a retired CEO and Chairman of Bank One of Southern Indiana, having spent 37 years with the company, said 4CDC board member and city councilor Ron Carter.

Ragland also served as president of the Southern Indiana Economic Development Council in New Albany, Ind., until his retirement in 2006. 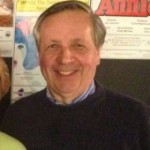 The city council also selects a member of the 4CDC board, and City Council President Rick Sharp said that John Clair will likely be approved by the council during its meeting Nov. 18.

Clair also is a former banker, having retired from Chase Bank seven years ago.

An actor who has lived in Carmel for the past 20 years, Clair serves as board chairman for the Carmel Theatre Company (formerly the Carmel Repertory Theatre), and he has been involved with Carmel Community Players, the Civic Theatre and the Broad Ripple Playhouse in the past.

But perhaps Clair’s most notable achievement was working with other volunteers to make the AACTFest convention, a national festival of community theatres from across the country, a success in June after the original organizers became overwhelmed and resigned, he said.

It was a trial by fire for the long-time actor, but he said the experience taught him a valuable lesson.

“If you’ve got enough volunteers that care, you can do anything,” Clair said.

The 4CDC, a 501(c)(4) nonprofit organization, collects rent from commercial tenants in the James Building at the Center for the Performing Arts and is part of complex financing mechanisms involving the Carmel Redevelopment Commission, City Councilor Luci Snyder said.

Board members Jessica Kruse and Tom Crowley resigned their positions in the past month citing the time constraints of their respective professional obligations.

The election of a new board president will likely take place at the next 4CDC board meeting on Dec. 10, Carter said.