You are at:Home»Current in Fishers»Festival of Carols has 3 shows 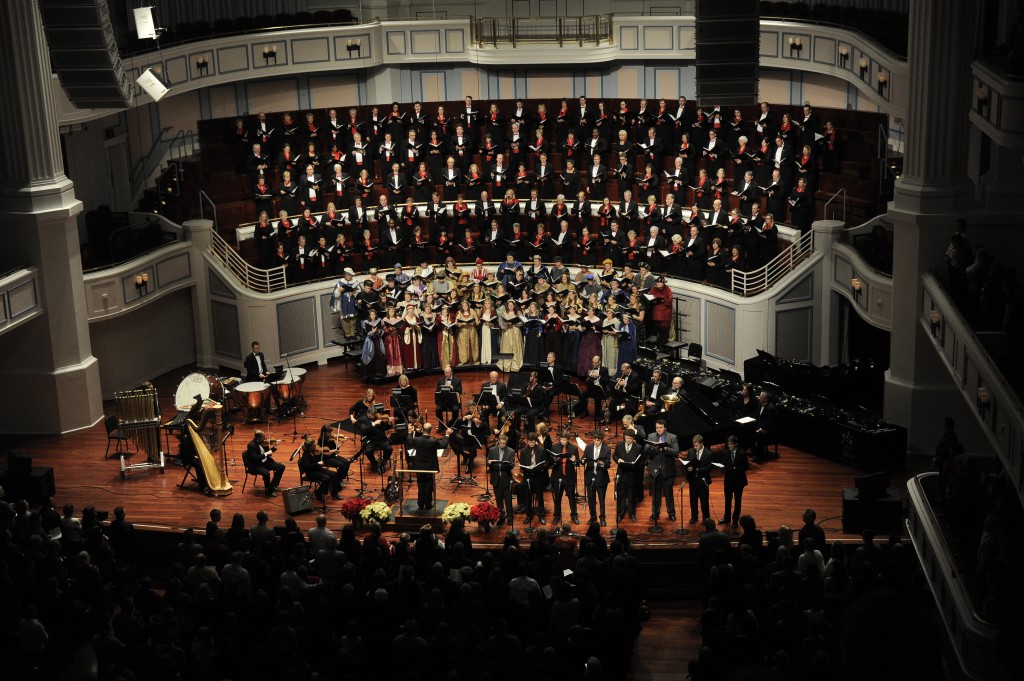 All you Scrooges and Grinches, shut up and SING! Don’t let the holidays get you down: hop aboard the 2013 Festival of Carols, and experience one of three performances that include two shows at The Palladium in Carmel and one show at the Scottish Rite Cathedral in downtown Indianapolis.

Fishers High School choir will join the 150 voices of the Indianapolis Symphonic Choir, the Indianapolis Chamber Orchestra, Circle City Ringers hand bell choir, soprano Maria Jette (as heard on NPR’s “Prairie Home Companion”), and the Butler University Men’s a capella group, Out of the Dog House. Fishers resident Brian Flora is a member of the ISC.

“Christmas is one of the most magical times of the year,” Jessica Kiefer of the Bohlsen Group said. “Taking an evening out of the bustle of the season to enjoy family and friends may be the best gift of the entire season.”

The annual show will sweep in the holiday season with music such as “O Holy Night,” “Joy to the World,” and a completely memorable version of “The 12 Days of Christmas.” Audience members may get their chance to sing along as well.

“Festival of Carols is a great opportunity to enjoy with the entire family during the holidays,”  said Michael Pettry, executive director of Indianapolis Symphonic Choir. “It isn’t unusual to see mom and dad with the kids, as well as the grandparents, all together at the performance for a holiday outing.”

Other music will include the “Hallelujah Chorus,” “Somewhere In My Memory,” and “Santa Baby.”

“The bottom line: Festival of Carols is one of those evergreen holiday must-do’s of the upcoming season. The performances have something for everyone … for kids from one to 92, as the song goes,” Pettry said.

“I was thrilled, of course, but not really surprised. Looking ahead, we suspect these shows will attract capacity audiences as well, especially given the addition of the Fishers High School Silver Classic choir as our special guest partner choir.”

“Families are looking to create new holiday traditions and memories. Nothing equals getting dressed up, having a cup of cocoa, meeting Santa and hearing your favorite Christmas carols in a world-class performance hall,” he said. “Santa will be in the lobby before and after each performance, and he may even make a cameo appearance on stage during the show. Ho, ho, ho!”

If you go: The Festival of Carols, an annual event featuring the 150-voice Indianapolis Symphonic Choir with the Indianapolis Chamber Orchestra and Circle City Ringers, will perform at two venues: the Palladium at the Center for the Performing Arts, 1 Center Green, Carmel; and the Scottish Rite Cathedral, 650 N. Meridian St., Indianapolis. The Festival of Carols will perform at 7 p.m. Dec. 8 at the Scottish Rite Cathedral and 3 p.m. and 7 p.m. Dec. 22 at the Palladium. Ticket prices are from $15 to $38 for all performances. For more information on the shows at the Palladium, call 843-3800 or visit www.thecenterfortheperformingarts.com; for the Scottish Rite performance, call 940-9057 or visit www.aasr-indy.org/.