You are at:Home»Current in Fishers»FJH celebrates diversity 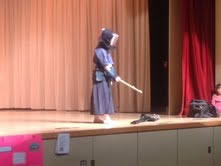 More than 60 different nations are represented in FJH’s student population. According to social studies teacher Maureen Randall, the International Fair’s purpose is to celebrate that cultural diversity. (Submitted Photo)

Fishers Junior High’s Cultural Competency committee and the seventh-grade Social Studies Dept. will be presenting their third annual International Fair from 6 to 7:30 p.m. Nov. 5. Students, families and the entire community are invited.

More than 60 different nations are represented in FJH’s student population and, according to social studies teacher Maureen Randall, the International Fair’s purpose is to celebrate that cultural diversity.

“Students are creating projects for display in a variety of ways but they all highlight and/or study the countries that make up FJH,” said Randall.

Guests can enjoy a wide variety of performances, food, art and other displays that were created by FJH seventh-graders.

“The International Fair was a great place to learn about different cultures that are in our own school,” Ibrahim said. “There were lots of people that brought different kinds of foods, art and artifacts to the fair,” he continued, “and I had lots of fun learning new things that were a major part of different families. I remember eating a piece of chicken that was really spicy so I had to rush to a water fountain quickly before my tongue burst into flames.”

The FJH Cultural Competency committee and the Social Studies Dept. are proud of their school’s diversity and are excited to showcase different cultures at the fair.

“One student has created a display on Germany and displayed their grandfather’s diary in German,” Randal said. “Several students learned how to make family recipes from India, China and Mexico, and several students who are immigrants themselves will tell their stories as to what it was like to move to the USA.”

The International Fair at FJH is a group effort. Ten FJH teachers work together to organize the event. Parents and families are encouraged to share in any way possible.