You are at:Home»Current in Zionsville»Creativity helps local organizations 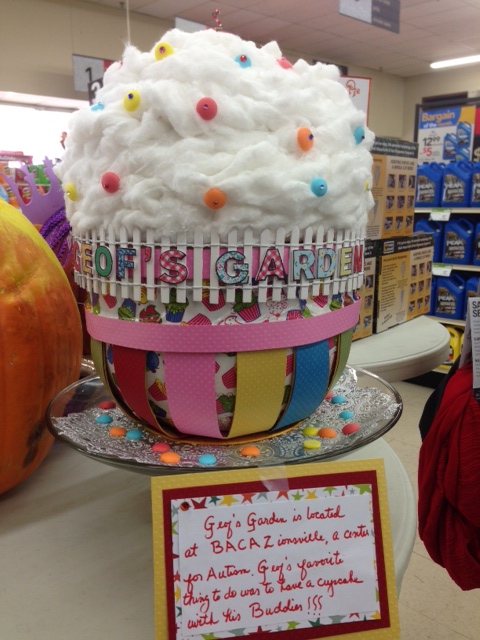 Geoff’s Garden, one of 11 pumpkins made by community members for the inaugural Pumpkins for a Purpose at Akard True Value Hardware in Zionsville.

Holidays like Halloween are a time for fun, but Zionsville resident Leigh Ann Akard also wanted to create a way for people to enjoy the festivities while giving back to their favorite causes. With that idea in mind, she started Pumpkins for a Purpose.

“I’d heard of a project where they painted pumpkins pink for breast cancer and I thought it would be fun to tweak the idea so that people could get creative with painting pumpkins and we could benefit multiple organizations,” stated Akard.

After putting out the call, Akard said 11 pumpkins were brought to Akard True Value Hardware at 25 Boone Village Shopping Center. Each pumpkin was displayed with a card talking about the organization its painter supported.

“It’s amazing how creative people were and the stories that accompanied them,” Akard said. Akard said one mother brought her pumpkin in with tears in her eyes and said she created it to honor her late son. His family is working with the Behavior Analysis Center for Autism in Zionsville to create a memory garden.

“She told me she was finally ready to do something like this after losing her son,” Akard said. The woman told Akard her son loved to garden and have cupcakes with his best buddies.

“Her pumpkin was created to look like a cupcake and she called it ‘Geoff’s Garden,” Akard said.

Other pumpkins included support for homeless veterans, Alzheimer’s disease and Multiple Sclerosis. Once on display, people could place a penny in each can with each group getting to keep the money donated towards their pumpkin. 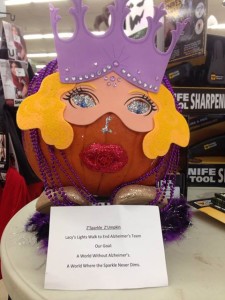 “I think all together there’s around $400 that was raised,” Akard stated. “It was such a neat experience.”

Several people created a Pumpkin for a Purpose in its inaugural year, including Amy Lacy. Her pumpkin was in honor of Z’Sparkle and Lacy’s Lights, which raises money for the Alzheimer’s Association. The team’s goal was to raise $30,000 and according to Lacy, they have raised almost $54,000. This puts the team in the top 10 fundraising teams in the nation. They placed ninth in the country out of 40,000 teams and is the only family/community team on the list, as opposed to the many company-sponsored teams.

“We are super excited with the success of Z’Sparkle. I am just in awe of the people on our team and the support of this community,” Lacy said.

To learn more about Lacy’s Lights and Z’Sparkle, visit www.zsparkledragrace.com.