You are at:Home»Current in Carmel»Carmel Education»Teachers contract negotiations closer to resolution 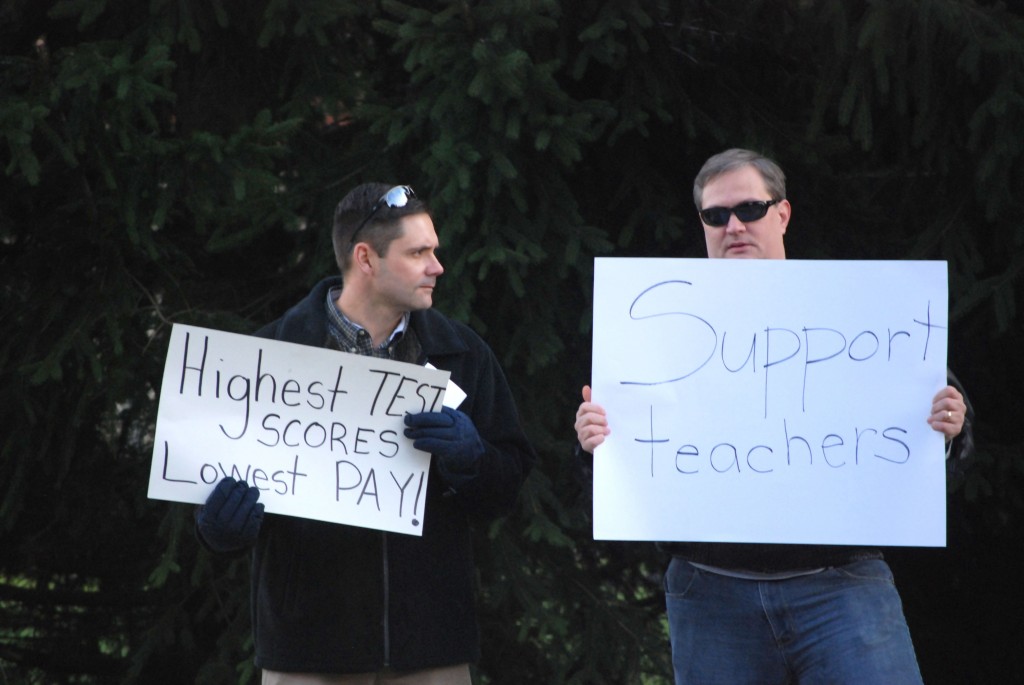 Carmel-Clay school teachers staged a protest on Nov. 27, 2012 at Woodbrook Elementary School. The demonstration came in response to teachers’ unhappiness with the lack of a contract. Photos by Amelia Nelson

A state mandated fact-finder, a role similar to an administrative judge, determined Sept. 27 that a contract proposed by Carmel Clay schools should be applied retroactively for Carmel teachers for the 2012-13 school year.

Carmel teachers have been working without a contract for more than a year, as the school district and the Carmel Clay Education Association failed to reach agreement on a one-year contract.

The fact-finder’s order could be still be appealed to the Indiana Education Employment Relations Board.

“We are one step closer to reaching a resolution on the contract, but we wish our ‘best offer’ was accepted which allotted for greater benefits and salaries for our teachers,” , Assistant Superintendent Roger McMichael said in a statement.

But parents and students should have little to fear. There is no threat of a strike and the excellent teaching standards maintained in the schools are likely to continue, McMichael said.

“We have a very dedicated staff here,” schools spokeswoman Tricia Reynolds said. “They are doing what they love to do.”

That lawsuit and its appeals process were recently resolved, and a decision on a 2012-13 contract was sent to a fact-finder after Carmel teachers overwhelmingly voted to reject the administration’s “last best offer” contract.

The reason the fact-finder, Sandra Jensen, said she could not accept the teachers’ proposed version of a contract was because it would exceed the school district’s annual revenue and result in the need for deficit financing.

The district’s teachers had been the only ones in the state without a contract, and the entire appeals process is blazing new legal ground.

The contract will give teachers a 2 percent raise but will remove the district’s 1 percent matching contribution to teachers’ retirement plans. Effective and highly-effective teachers also will share a performance bonus pool.

The order also determined that teachers must rely on individual short-term disability benefits instead of pooling leave days into a communal catastrophic leave bank.

Other teachers’ association efforts to negotiate further work-day terms were determined to be unallowable in Jensen’s fact-finding order.

And the issue of a teachers’ salary schedule continues to loom over the district despite its best efforts. Teachers have typically advanced in salary through a schedule that rewarded experience and higher education. The schedule currently is not part of an offer in the 2012-13 contract proposal, Lyday said.

“What we’ve tried to discuss are the long-term ramifications on the school district,” Lyday said.

Even the presence of a teachers’ salary schedule in the separate 2013-14 budget, which is currently being negotiated, offers little hope of bridging the divide between the teachers association and the school administration.

Those contract negotiations are headed to mediation, too, Lyday said.