You are at:Home»Current in Zionsville»Burgers, deli, bakery, coming soon

A rendering of the South Village on Zionsville Road looking north from 106th Street. (Submitted rendering)

The aroma of burgers south of the bricks will be arriving in early November. Bub’s Burgers and Ice Cream in Zionsville will the anchor the South Village, and it is just the beginning of the development. If all goes as planned, Bub’s will be joined by a second location of Confectioneiress Bakery, Storen Financial, Village Cleaners, Sub Sixteen Deli and a 2-story space still available for rent. There is also potential for a future sixth stand-alone building in the master plan.

“We will be breaking ground next week (on lots next to Bub’s) with a target opening of the end of the year,” Developer and Owner Bob Harris said. “The remaining space to be rented is a 2-story end cap and would make a great real estate or insurance office.” 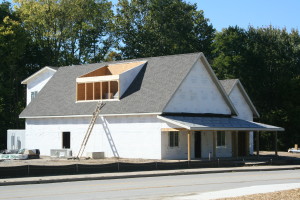 Bub’s, still under construction, has a targeted opening of early November. (Photo by Julie Osborne)

Bub’s Burgers owners, Matt and Rachel Frey, are excited to be opening their third Bub’s Burgers and Ice Cream in Zionsville. Their original restaurant opened on Carmel’s Main Street in May 2003 and a second location in Bloomington in August 2009.

“We’re excited about being a part of the Zionsville community,” Frey said. “It’s not about the money, it’s about putting our restaurant in the right place and with the right people, and that’s Zionsville.”

Frey’s goal is to open at the new location either the first or second week of November. The new restaurant will seat 125 people, including their outdoor deck which overlooks the creek, and will be open seven days a week from 11 a.m. to 10 p.m. Hiring has already begun.

“We’re always hiring. We like to hire young people to train them about professionalism, teamwork, accountability, and responsibility, but we need day shift people too,” Frey said.

With their family-style atmosphere and famous burgers, Bub’s is sure to be a hit in downtown Zionsville where few restaurants cater to families.

“It’s a need Zionsville has – a family restaurant,” Frey said. “It fits in the environment of Zionsville.”

Harris agrees, “With Matt and Rachel Frey it’s no doubt. It (Bub’s) will be great for them and the families of Zionsville.”