It would be easy to attend a symphony performance at the Palladium and feel as if it had always been so – a perfect match of musicians and concert hall. But as any long-time city resident can tell you, Carmel wasn’t built in a day. 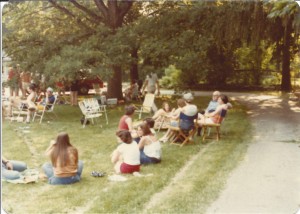 So as listeners settle comfortably into their seats for the 2013-14 season, they might take a moment to ponder the incredible journey this orchestra has taken – from simple beginnings to what is now a highly regarded artistic force in central Indiana and beyond.

An orchestra is born

In 1975 a group of 15 musicians began playing music together for their own pleasure in the Carmel Friends Meeting House on Main Street. They managed to raise an operating budget of $5,000, and one of their earliest fundraisers was a garage sale which, according to meeting minutes, netted $250.

Their rehearsal space was soon upgraded with a move to Carmel Methodist Church.

The first conductor of the orchestra was Latvian-born Viktors Ziedonis, and its first public performance was Dec. 21, 1976, in the Carmel High School auditorium.

The controversial Ziedonis was with the orchestra for just two seasons until he was dismissed by the board for “personality conflicts,” according to news reports from the time.

A series of conductors

James Edington succeeded Ziedonis and served as conductor for three seasons from 1978-81. Following Edington’s brief tenure, another controversial leader was found in Benjamin del Vecchio, who led the orchestra for only two seasons. He was followed by Grzegorz Nowak, a native of Poland who resigned to move to Switzerland after only one season. 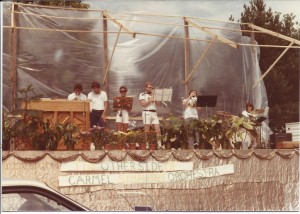 Finally, a leader with staying power was found in David Pickett, who led the orchestra from 1984 through 1998.

Miriam Ray funded an endowment which endures to this day.

Jeanne Book served as general manager from 1994-95and has faithfully provided refreshments to the symphony during dress rehearsals every year.

Fran Shoup, who sat as second violinist for thirteen years and also served as general manager from 1987-1993, brought about significant increases in arts grants and support from local businesses. Founding members Jan Brill, a cellist, and Ann Manship, a violinist, also worked tirelessly to help solidify the orchestra’s foundation.

“We all really worked together,” Book said. “We did a lot of really creative things, fundraisers, anything we could think of to support the group.”

In 1999, the board recruited David Bowden, a Bloomington resident, to help bring the CSO to the next level in anticipation of the orchestra becoming the resident company of the planned Palladium theatre. Bowden is now entering his sixteenth season as artistic director of the CSO.

“In my earliest days here, the focus was more inward than outward. There were performances where there were more people on stage than in the audience. My goal was to take this wonderful family of musicians and move them toward professional structure, to move the focus outward, compress the rehearsal cycle and raise the expectation level, while still preserving the community feel,” Bowden said. “One of the keys to our strategy was to recruit Larry Shapiro as concert master in 2005.”

Today the CSO has grown to a full-time staff of four: Bowden, along with President and CEO Alan Davis, General Manager Denise Ryan and Marketing Director Clint Reeves. The CSO has also just moved into spacious new offices in the Pedcor building.

Pedcor Companies’ president and CEO Bruce Cordingley has long been a supporter of the arts. 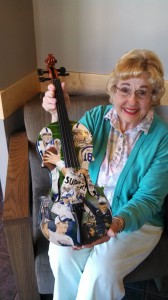 “I love the way that the CSO concerts include both a very talented professional orchestra and also often include local groups of musicians and singers,” Cordingley said. “All of their concerts are both fun and educational as the conductor (Bowden) goes to great efforts to explain the historical and musical background of each part of the performances. The CSO is something that we are all very proud to have a part of the Carmel and Carmel City Center communities.”

“We are just starting our strategic plan for the next three years, to take us through our 40th anniversary. Our goals include sold-out performances for every concert and one big-name soloist every year,” said Davis.

Yet another diverse and compelling season has been created by Bowden, including a return of New York City’s piano virtuoso Di Wu, a holiday concert by the jazz vocal quintet Five by Design, a romantic Valentine’s Day celebration featuring Ariel Horowitz (a seventeen-year-old violin prodigy from Bloomington) and a percussion celebration in March with over one hundred percussion instruments on the stage at one time.

Humble origins aside, the CSO has grown from a group of fifteen musicians rehearsing in a basement to a group of 85 professional musicians attracting talent from around the world. The annual operating budget has grown from $5,000 to $750,000 and the orchestra currently boasts 480 season ticket holders.

Throughout turmoil and turnover, the Carmel community has stood behind its symphony, and the CSO today is a shining example of what a dedicated group of citizens can do.

Larry Shapiro is beginning his eighth season as concert master of the Carmel Symphony Orchestra. In addition to his responsibilities with the orchestra, he also is a violin professor at Butler University.

He and his wife, Ashley, have been married for 52 years. They reside in College Park.

“It is a happy coincidence that the first concert of the season features Mahler’s First Symphony,” Shapiro said, “as that piece happens to have been featured in the first concert I played with CSO eight years ago.”

“It is also a marriage made in heaven that our first concert of the season combines orchestral music with dance, as that combination is very precious to me,” he said. “Ashley was a ballerina when we met, and we still work together to this day.”

Shapiro has been combining the arts of orchestral music and dance for many years now. He toured with American Ballet Theatre for years and through that affiliation met Mikhail Baryshnikov. That meeting led to an appointment as the first chair violin for Baryshnikov’s White Oak Dance Project.