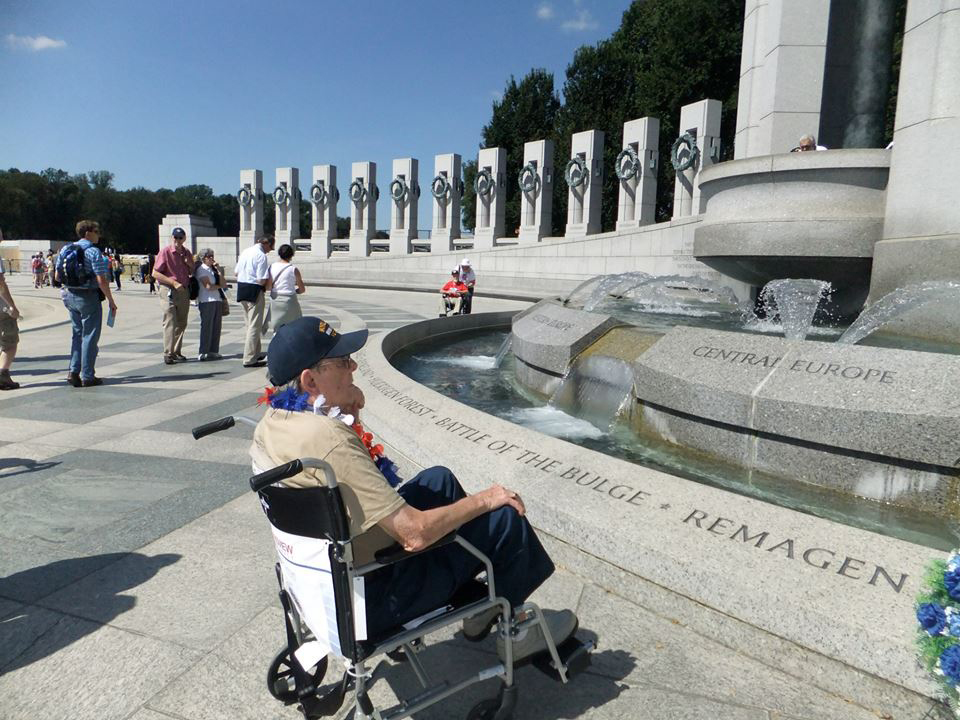 A veteran gazes on the new WWII Memorial in Washington D.C. on Sept. 7. (Photo by Ronald P. May)

By Pete Smith and Ronald P. May

When Harry Cooler Jr. stepped on the plane on Sept. 7 that was to take him to Washington D.C. on a trip to visit the World War II museum, he likely expected a ceremony or two would take place.

But the Carmel resident was wholly unprepared for the approximately 4,000 people who came out to greet him and his fellow veterans when his plane arrived at Ronald Reagan National Airport.

“It was very touching. It was an emotional time,” Cooler said of the active military members and civilians who took the time to honor the veterans. “We didn’t know that was going to happen.”

It was one of many surprises in store for Cooler and the other 69 World War II veterans who made the trip courtesy of Indy Honor Flight, a charity that funds the travel expenses of veterans to see the memorial.

When the group made it to the World War II memorial, Cooler said he was stunned by its beauty and size.

“It was awesome. It took up the space of two football fields,” he said.

The veterans also had the chance to tour the Korean War and Vietnam Memorials and Arlington National Cemetery, where the group witnessed the impressive changing of the guard ceremony at the Tomb of the Unknown Soldier.

It was a great opportunity to remember and reflect on that time in their lives.

“I’m just thankful to be here,” Cooler said. “We lost some men, some good friends.”

Cooler served in Europe from 1944-45 as a member of the 413th Armored Artillery Battalion, 20th Armored Division.

When the tour was over and everyone had boarded the return flight, Honor Flight organizers unveiled another surprise – a 1940s –style mail call that had often been the lone bright spot of their service in the war.

The veterans returned to Indianapolis to several thousand family members, friends and patriotic citizens gathered at the airport in a parade-like atmosphere to clap, cheer and wave flags as the heroes passed by them one by one with large portraits of their service photos carried behind them by their guardians.

The veterans, many of whom returned from World War II months after its end and never received a proper homecoming, were welcomed back in grand fashion as they walked out of the B Concourse and into the Civic Plaza adorned with flags, balloons, posters and throngs of people.

A bagpipe procession led the way as each veteran and his or her guardian walked through a hallway of cheering people who had gathered to thank and welcome home their local heroes. Along the route, each veteran received a welcome home kiss from a woman dressed in 1940s-style clothing. At the end of the hallway of people the tired but extremely satisfied veterans were reunited with their family members.

Cooler’s wife, children and grandchildren all arrived to welcome him home. His wife even made a special poster board filed with photos from his life.

“It was an emotional day,” Cooler said. “It brought back a lot of memories. It was an awesome trip.”

This charity hopes to make four flights in 2014. For more information on signing up a veteran, making a contribution or volunteering with the organization, visit www.indyhonorflight.org or call 559-1600.