You are at:Home»Current in Carmel»Carmel Community»Hockey Helps: Student Leads Charity 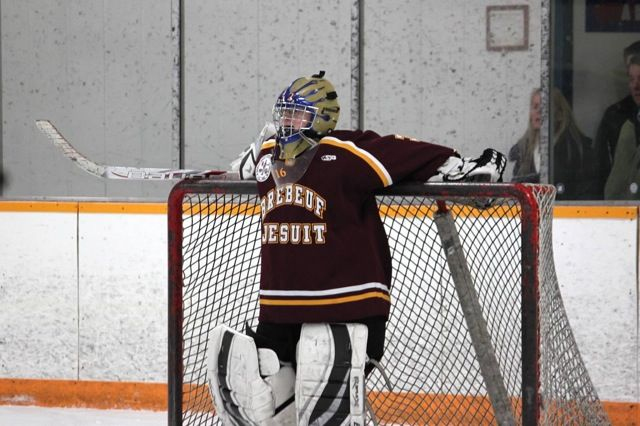 In addition to a six-month season as the Brebeuf Jesuit Preparatory School’s ice hockey goalie and studies as a Carmel junior and school newspaper reporter, Tyler Baumann has coordinated a charity called Hockey Helps to raise funds for St.Vincent’s Peyton Manning Children’s Hospital in Indianapolis.

Baumann developed this pledge drive in cooperation with Brebeuf Jesuit Ice Hockey. He said that people can pledge an amount of their choice to the campaign for every time he makes a save during the 2013-2014 hockey season. Pledge amounts can vary.

“I am aiming to make 1,000 saves during the season,” he said. “So we completely understand if the pledge is small. Patrons may also put a cap on the amount they wish to donate.”

Hockey Helps uses the funds to purchase toys that will be donated to St.Vincent’s Peyton Manning Children’s Hospital.

“This charity relies solely on the responsibility of the Brebeuf Jesuit ice hockey players,” Baumann said. “We are responsible for getting the word out, getting pledges and playing well. The better we play the more money we will earn for our cause.”

“I am very proud of the initiative he has shown as well as his desire to involve the rest of his teammates,” said team coach Don Perkins. He said the team practices three times a week for a schedule packed with more than 40 games per season.

“Keeping my schedule organized isn’t as difficult as you might think,” Baumann said. “Brebeuf practices before school at 5:30 a.m. This leaves me time after school to work on homework and organize Hockey Helps.”

“For Tyler to extend himself this way for such a great cause is extremely noteworthy,” Perkins said. “His decision to spearhead this project shows a remarkable level of leadership.”

Perkins said Baumann performs his goalie duties at a level that requires great focus and also inspires confidence in his team.

Baumann tallies the number of saves each week and sends donors an email announcing the number of saves made. He also keeps donors posted on the organization’s twitter page @HockeyHelps32. Baumann said the team looks forward to making their donation to the children’s hospital and hopes to sign several pledges by Sept. 22.

“In the next few seasons,” said Baumann, “I plan on trying to get other teams involved by asking them to do a similar pledge campaign and donate the money raised to a charity of their choice.”