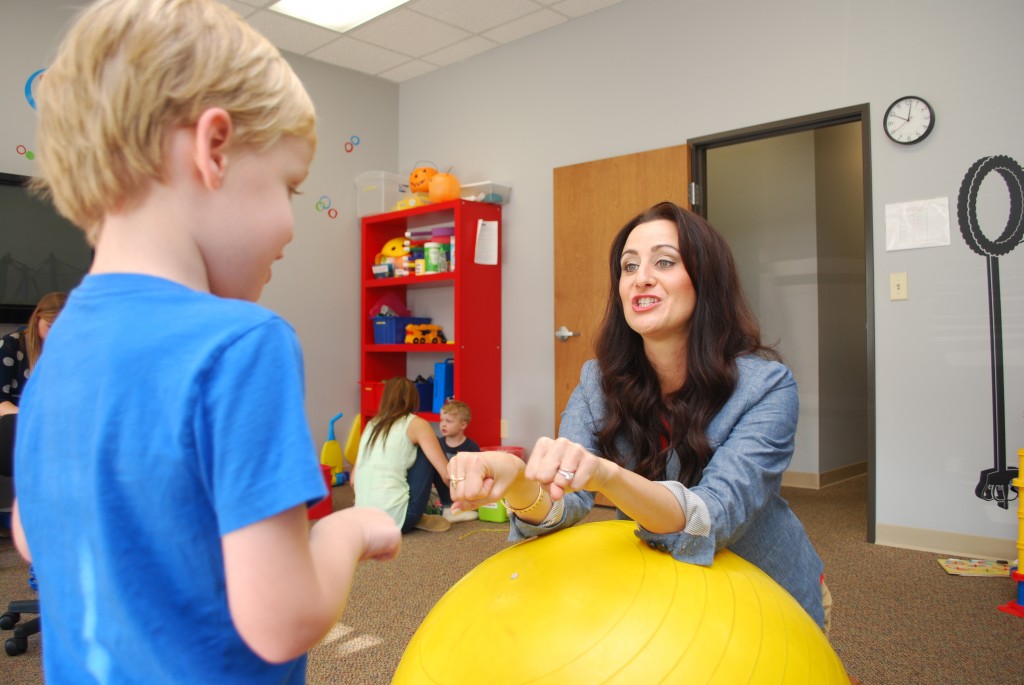 Courtney Bierman works with Crew on his sign language inside the playroom of Bierman ABA Autism Center. The center has just broken ground for a larger facility in Westfield. (Photo by Robert Herrington)

The first session was conducted at the Gorman home. Within the first 15 minutes, Bierman already had Mary laughing and saying a brand new word. By playing with the child and flipping her onto the bed, Bierman had taught Mary to say the word “flip.” This breakthrough came after months of the girl only quoting movies.

“I think the word that would best describe how I felt was hopeful,” Gorman said. “Mary learned that one word so quickly that I thought there may be a way to tap into all the words and feelings within her. There was a sense that ABA could really work for her.”

Bierman started providing ABA therapy to children with autism almost 12 years ago when her cousin was diagnosed.

“He was receiving ABA therapy and making a lot of progress from it. I wanted to make a difference and work with kids like that too,” she said.

Bierman currently works out of the Bierman ABA Autism Center located at 172 W. Carmel Dr., but Bierman ABA just broke ground for a new center to be built in Westfield.

“We have put a lot of thought into this building and we have employees put in their input and it will be a truly unique building,” Bierman said. “There won’t be another facility like this in Indiana. It will be a fun place for the kids and an amazing place for the employees to be at every day.”

What will make the new center unique? Bierman said the building is not arranged in the traditional and prevalent office and cube concept, but tries to simulate a natural environment through unique and creative design.

“We are also located strategically to serve the Westfield, Noblesville and Carmel communities and are neighbors with an elementary school and a day care, which provides parents added convenience,” she said.

The new center in Westfield is expected to be open by Dec. 10. With more room and neat activities, the kids and employees are each likely to enjoy the facility.

“Looking at the blueprints and everything that Courtney has in mind for the center, I know it’s going to be really cool and great for kids in need of those services,” parent Angie Josephson said. “I recommend this to any parent with a child who has autism.”

ABA therapy is known to be extremely successful for autistic children because of the early intervention and the fun, playful environment where the kids are taught. The engaging atmosphere doesn’t feel like a therapy session.

“We use different principles. We figure out what motivates the child and find out what the child is interested in and we use that to help them learn. We do it in a way where kids don’t look at it as work, they look at is as fun,” Bierman said. 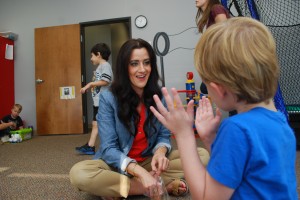 Crew, a student at Bierman ABA Autism Center, claps when asked to before receiving a snack as positive reinforcement by Courtney Bierman.

After three years of attending ABA therapy sessions, Mary has graduated the program and now attends Westfield Washington Schools. Her language skills are phenomenal and most people don’t realize she is autistic when they first meet her. She doesn’t exhibit certain autistic behaviors anymore, such as flapping her hands. Mary still occasionally visits the Bierman ABA Center for socialization with the other children.

After six months of ABA therapy, Gorman was putting her daughter to bed. She told Mary she loved her just like she did every night. However, Mary did something unexpected. She replied with “I love you too, Mommy.” Gorman says that those words brought tears to her eyes.

“I must tell you though that hearing her say flip was nothing compared to the first time she said ‘I love you.’ Those are words that most parents can take for granted,” Gorman said. “ABA gave Mary back to us. She is bright and funny and very loving. We are more thankful than we can say.”

Another child enrolled in ABA, Savannah Josephson, also improved with the therapy. Initially nonverbal, it was very hard for Savannah to communicate with her mother, Angie Josephson. After attending the therapy for three years at 40 hours per week, Savannah can communicate her wants and feelings with more than 300 signs and her behavior has improved drastically.

“We absolutely love the Bierman ABA Center and would recommend it to anyone and everyone who needs to utilize the services,” Josephson said.