You are at:Home»Current in Fishers»‘A roadmap for developers’ 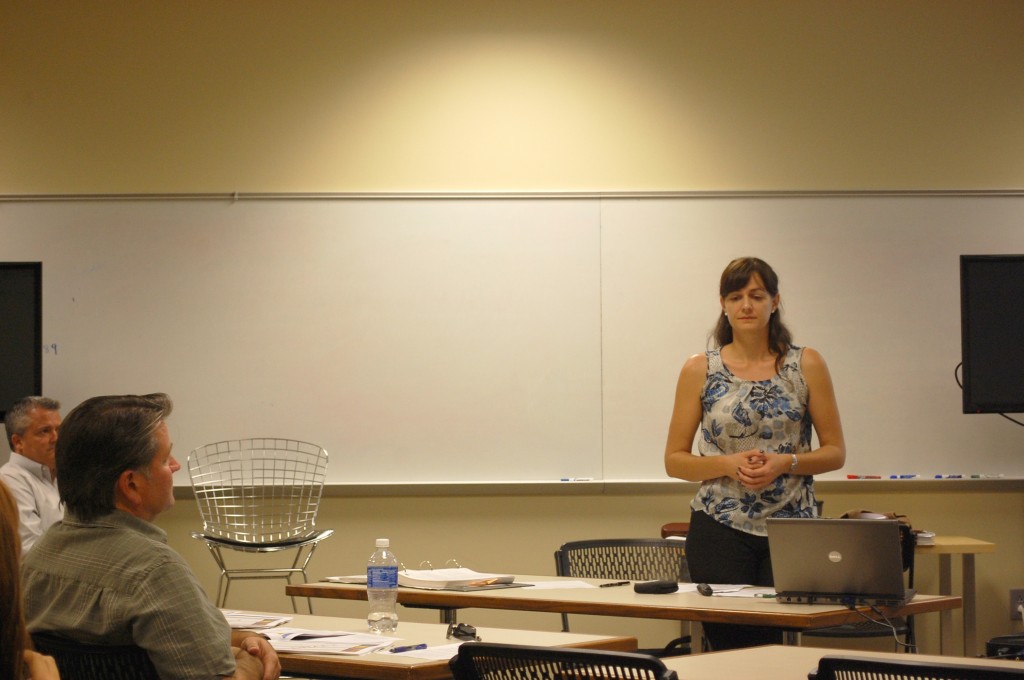 Rachel Johnson, asst. director of planning, and other community development staff members briefed the audience on the Form Based Code.
Map – Within the code is a “Regulating Plan” that includes neighborhoods or subdistricts with their own characteristics.

The Town of Fishers is proposing tackling downtown redevelopment with a type of zoning code that puts the emphasis on what buildings look like, rather than what’s in them.

On Sept. 9, the Community Development Dept. presented a draft of the Form Based Code that targets downtown – specifically the Nickel Plate District – land and would be the vehicle for the town’s Downtown 2030 Plan, which focuses on the area being walkable, among other issues.

This new code could go before the Fishers Town Council for a first reading as soon as Oct. 7.

The code is meant to take a crack at zoning from the viewpoint of how buildings look, rather than a more traditional take on zoning that focuses on what types of uses could be built in an area.

Form-based codes got their start in Chicago 12 years ago.

Dale Davis, a planner, detailed a concept of what the code could lead to at a specific downtown site – a single multi-use building that would actually look like four and include a parking garage.

“We’re trying to make it so we don’t have a hodge-podge of building frontages,” he said.

While straight form-based codes only address the looks of zoning, what is being proposed will have some prohibited uses.

The Nickel Plate District is further broken down into multiple neighborhoods with four designations that give way to what uses and building types are appropriate. Those designations are the Downtown Core, Neighborhood Center, Municipal Center and Highway Center, each with their own characteristics.

While a defined list of prohibited uses wasn’t given, some examples of legal nonconforming uses were brought up, including that a homeowner could completely rebuild if their property is destroyed by an “act of God.”

In attendance were members of both the Town of Fishers and Fall Creek Board of Zoning Appeals, the Plan Commission and the Fishers Town Council.

Dickey said aspects of the plan are being debated internally and first reading of the code will be the staff’s proposal.