You are at:Home»Lifestyle»Blueprint For Improvement»Master Bath Remodel: Updating 1990’s Materials 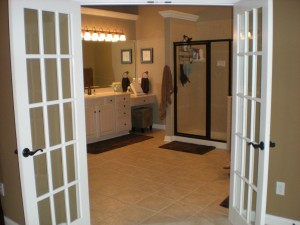 EXISTING MASTER BATH: Built in 1999, this home located in the Lynnwood at Plum Creek neighborhood in Carmel does not look its age. However, as the second owners, these homeowners knew they would remodel the master bathroom. “When we bought, we loved the house and the location,” stated one of the homeowners. “However, the master bath was very pink and dated, so we planned to change it right from the start.”

DESIGN PROCESS: “The original bathroom was done with builder grade materials,” said one of the owners. “The tub was bigger than the shower, and was not a good use of space. We had a big, beautiful bathroom space with vaulted ceilings, but we did not like the style or functionality. You use your bathroom every day, and we wanted to create a space we liked.”

ENLARGED SHOWER: Enlarging the shower was the top priority for the new design. According to one of the owners,“The old shower was so small it was annoying and difficult to use. We wanted a shower like the one we had in our last house, with double shower heads and a corner seat. A big shower works well for us.” Relocating the expanded shower to an existing corner opposite the double-door entry made it a focal point for the space. A frameless glass door in the arched doorway highlights the uniquely-textured white wall tiles and the granite seat. 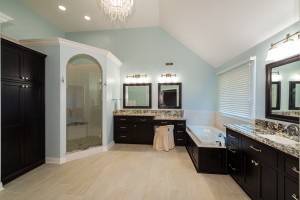 INCREASED STORAGE: The homeowners knew what they wanted for storage as well. “I was looking for more than a linen closet in the bathroom,” stated the homeowners. The cabinetry next to the shower has space for towels, but also serves as storage for accessories like scarves, hats and purses.

FINAL RESULT: The final result was pleasing. “We were looking for our bathroom to feel like an upscale spa in a luxurious hotel. Working in collaboration with our designer using 3-D modeling software helped us see the final product before it was built. It was helpful to see the scale of each part. We love the new space. The Tiffany box-inspired colors gave us the clean look we wanted, and the light fixture is the perfect jewelry for the room.”