You are at:Home»Current in Fishers»Speed racer 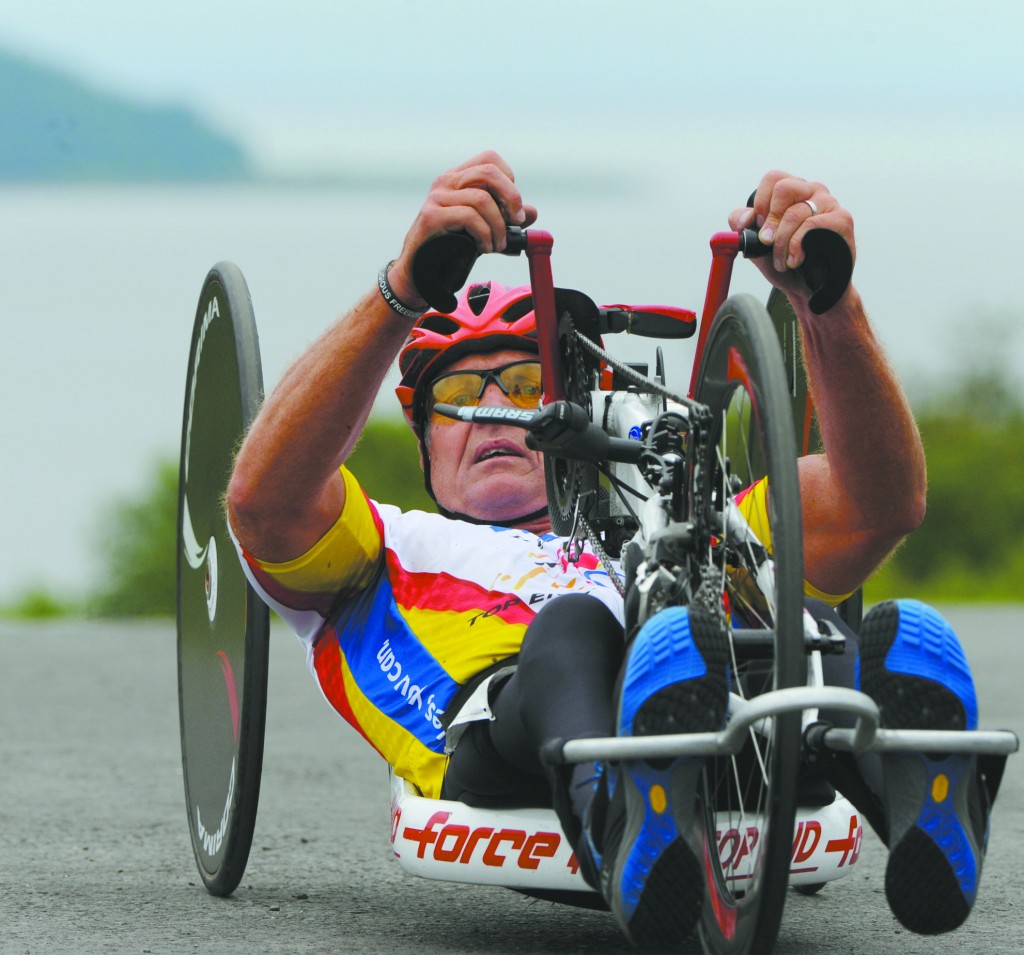 Martin raced through the Sadler’s Alaska Challenge. He said it was the greatest physical challenge he’s ever completed. (Photo by Bill Roth/Anchorage Daily News)

After an accident left him paralyzed, Butch Martin uses his hands to propel his love of racing

Fishers resident Butch Martin takes a downhill turn at more than 40 miles per hour on his recumbent hand cycle.

He races against competitors from all around the world and the U.S. on a two-lane open highway in Alaska.

He’s hugging the line in the middle of the road, and the logging truck, moving at an even faster speed, goes around him. It’s Sadler’s Alaska Challenge – a grueling six-day invitation-only contest broken into seven segments for four divisions of handcyclists – all with different disabilities or levels of paralysis – to prove who is the fastest.

Martin finished in second place at the competition earlier this summer, only being bested by Rafal Wilk, a Polish racer.

“He is arguably the fastest man in the world right now in a hand cycle,” Martin said. “So, to compete with him and hang out with him for a week was a pretty valuable experience for me. (It) made me faster.”

His wife, Amy, said she is competitive as well, and it’s fun to have a person to cheer for.

Competitive thirst is just one trait Martin said keeps him going. Fast-moving competitions have been part of his life before and after he lost the use of his legs in 1982.

More than three decades ago, Martin raced motocross, picking up his pro card in 1980. 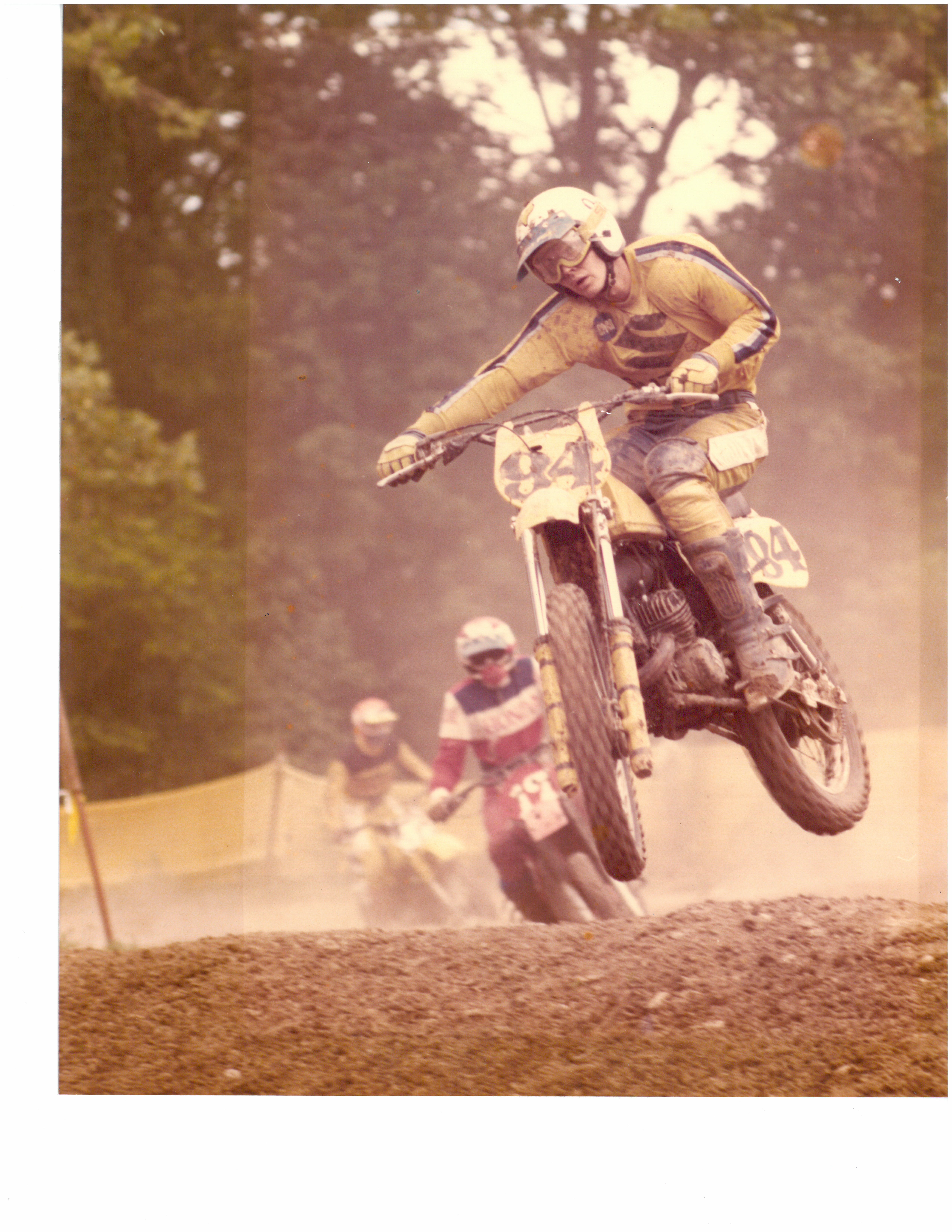 He said he misses it, but he does use four-wheelers and getting a three-wheeler road bike is on his “bucket list.”

Martin worked in the steel industry, and in 1982, he suffered a work-related accident, resulting in a spinal column dislocation and spinal cord pinch.

A customer had trouble with a 3/8-inch thick and about 8-square-foot piece of plate steel. While looking for the heat number – a stamp – that would help reveal what might be wrong with it, the overhead crane holding it malfunctioned, and the gigantic sheet of steel fell.

Martin said the steel weighed around 1,000 pounds, and it was so large he couldn’t run from it. In a feat of adrenaline-fueled strength, he braced it with his shoulder, picked it up and held it for 10 to 15 seconds.

“The miracle of the whole accident was the fact that as I collapsed, the steel plate fell on me, I was able to push it along the ground,” he said. “So when it fell on me, it did not engulf my head.”

About a month after the accident, he participated in his first wheelchair road race. He cross-trained on a handcycle, and after going through two spinal surgeries, he completely switched to handcycling in 2009.

“Whether we’re (people) able bodied or disabled, there’s a lot of mental and physical benefits that come from recreating,” Martin said. “I’m just a very competitive individual. I don’t feel good unless I’m competing in something. That’s just the way I’m wired.”

Wired for competition, he trains for 200 to 230 miles weekly, and did even more in preparation for the race in Alaska. 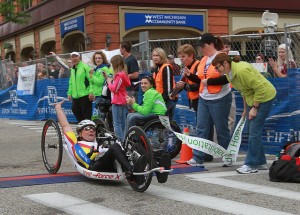 Martin has medaled in multiple
races, and he plans to participate in European races. (Submitted photos)

He said it was the greatest physical challenge he’s ever completed. While some segments of the race were flat, fighting elevation was no simple task.

On the last day of the race, he traversed Hatcher Pass, which included a piece of the course nicknamed the “Mother Load,” a stretch with a 15-percent elevation grade.

“I was actually kind of fearful at that point whether I was going to make it or not,” he said. “I did a lot of praying.”

“He is truly an inspiration to me,” neighbor Joe Kalil, 77, said. “He’s an example for anybody to overcome anything. He’s a great example for that.”

Standard observation may lead people to see Martin as an example of a person not letting anything hold him or her back.

He doesn’t quite see it that way.

He said his disability doesn’t change who he is.

“I’m just driven to be the best person that I can be, whether I have a severe disability or not,” Martin said. “That’s really the bottom line.”

About Handcycles: Martin said handcycles are composed mostly of mainstream bike parts. There is a type that accommodates people with amputations, as well. The driver cranks the pedals with his or her hands in a unison motion.

When he built his first Fishers home: 1985

Philanthropy:  Member of board of directors at Village of Merici (learn more at www.villageofmerici.org)

Other hobbies: Hunting and fishing