You are at:Home»Current in Carmel»Carmel Community»New CCS boss to earn less

On Aug. 20, Carmel Clay Schools board held a public meeting to discuss the proposed contract for Dr. Nicholas Wahl, the new superintendent scheduled to start Aug. 28. Of the eight citizens attending, no one voiced objections to the contract. 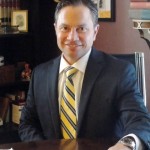 The contract proposes a five-year term and an annual salary of $195,000 with increases considered each year. Benefits include a $700 monthly vehicle allowance plus fuel expenses, health insurance and a $9,750 retirement contribution per year.

In addition, an incentive program similar to those established by Indianapolis Public Schools and Southeastern School Corp., encourages the superintendent to attain annual goals set by the board.

Board president Layla Spanenberg explained these goals could not be discussed until the superintendent’s contract was official.

“The bonus is discretionary,” she said. “It’s based on the board’s evaluation at the end of the year.”

Last year, former Supt. Dr. Jeff Swensson’s goals included working with the curriculum division and administrators to promote the common core standards and increase literacy achievement. He also personally addressed the Dept. of Education on legislation and its impact on a high performing school district.

Before the hearing, a member pointed out Swensson resigned before earning deferred incentives.

The board will pay for Wahl’s relocation from Hinsdale, Ill., to Carmel.

The Hinsdale Times reported Wahl took a “pay cut to join Indiana district.” As superintendent of the Hinsdale District, Wahl’s contract included a $253,040 annual salary plus $52,000 in other benefits such as pension contribution and health insurance.

The board will take action on the contract Aug. 28 at 6:45 a.m. followed by a welcome reception to officially recognize Wahl as the district’s new superintendent.