You are at:Home»Lifestyle»Blueprint For Improvement»Space planning is the key to a successful basement remodel

Existing basement: Located in the Saddlecreek addition on the west side of Carmel, this home had suited its owners since they built it. However, as the children grew, it was time to reassess how they utilized their space. “Now that the kids are older, we do not have as many toys,” stated one of the homeowners. “We created a family project of purging the old stuff to create an area that we could all use.” 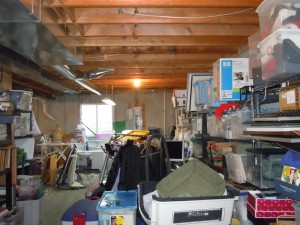 Before, the family’s basement area was used to store toys and other items a young family needs. (Submitted photo)

Design phase: Creating a multi-use space was the goal of this remodel. “I have a home-based sewing business,” said one of the homeowners. “I needed space to work and stage. Also, my husband needs room for his new hobbies. And, we have always wanted an exercise area that was separate from the kids’ area.” The lower level was previously unfinished, but was still being used as a work, exercise and storage space for the family. Transforming the original basement into a welcoming place for the whole family meant designating areas for their many interests.

Space planning for family activities: The final design created activity vignettes within the original footprint of the basement. The two spaces around the central staircase were long and narrow with two alcoves. End walls of the main room became hobby and work areas with plenty of space left in between for large gatherings. The media room and musical instrument practice area were tucked into the alcoves. The exercise room was set into the area on the backside of the staircase, where a large gathering space was not needed. The existing plumbing dictated the placement of the full bathroom. Fortunately, it was located on a back wall that supported the intended work flow. Natural light from the two daylight windows was supplemented with a comprehensive lighting plan. 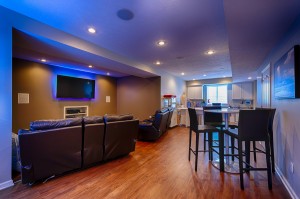 After, purging items the family no longer needed created room for more specialized areas for mom and dad, such as a sewing space and a special place for an aquarium. (Submitted photo)

Speciality spaces: Cabinetry was designed for the intended use of each area. The sewing space needed long tables and lower and upper cabinets. The fish aquarium area needed a sturdy countertop and floor space. In the bathroom, a decorative utility sink provides the space needed to clean the fish tank while blending with the overall décor.

Final results: “The remodel has changed how we live,” stated one of the homeowners. “My two daughters go down there and hang out together. We have family movie night and do lots of crafts, too. It’s nice having a practice area without having the rest of the house involved. We can just shut the door and no one hears anything.”