You are at:Home»Current in Carmel»Carmel Community»Bus Rapid Transit possible in Carmel

The meeting focused on the Red Line, a 23-mile track that would run north to south from Carmel to Greenwood, allowing access to downtown. Those who attended offered suggestions for improvements and learned more about how Indy Connect plans to develop mass transit in Central Indiana. 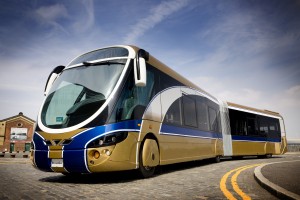 A bus similar to this one would be used for the Rapid Transit Lines and either share lanes with traffic or have a lane designated for it alone. (Submitted photo)

Christine Altman, a Hamilton County Commissioner of 13 years, has advocated the building of mass transit in Indianapolis for almost 10 years. She believes an improved transit system in the region would reduce emissions, enhance quality of life and “increase economic development around the stations and corridors.”

During the past months, researchers evaluated light rail, streetcars and commuter rails as well as current and future population density and employment density. The study took many other factors into consideration, one of which included decreasing travel time. The plan for Bus Rapid Transit as a mode of transportation would cut 15 minutes off of a 52-minute trip from 91st and Meridian streets to Capitol Avenue and Market Street.

“The underlying basis of this network is doubling the bus service… increasing that frequency,” said Anna Tyszkiewicz, executive director of Indianapolis Metropolitan Planning Organization. Where the bus used to come every half hour or hour, wait time would decrease to 10 or 15 minutes.

The plan will not move forward though without consent from Indiana’s General Assembly. The Senate cut short legislation in early April, which would have allowed Marion and Hamilton counties taxpayers to vote on a referendum. The referendum would place a three-tenths increase on income tax to improve regional bus systems. Since Carmel doesn’t have a bus system, the tax would serve to create one.

The legislature ordered a study committee to create a report to be reviewed Dec. 15. On Aug. 5 the study committee held a meeting at which Mayor Jim Brainard testified, according to the meeting minutes, that the region “has a fiscal need and a competitive need to expand mass transit.”  The minutes also recorded that Brainard “noted that Carmel has growing populations of people under 30 and of people over 55 who are both key transit users.”

Another meeting for the study committee will be held on Sept. 10. More information on the minutes and upcoming meetings can be found under the Central Indiana Transit Study Committee on the Indiana General Assembly website. To ask questions or make comments on Indy Connects’ research, visit www.indyconnect.org.