You are at:Home»Current in Zionsville»Monument celebrates Second Temple

Lying between the ruins of the Roman Forum and the Coliseum is a monument celebrating the destruction of the Second Temple in Jerusalem. Ironically, this same monument provided the model for the emblem of modern Israel.

The Second Temple was one of the most impressive buildings in the Middle East during the early part of the first century. Substantially enhanced by Herod the Great to burnish his own image, the Temple displayed a large seven-candle menorah, fashioned of solid gold according to a design the Bible says God gave Moses. 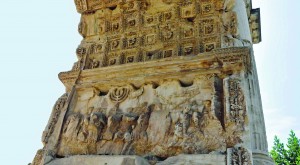 A relief in the Arch of Titus shows Roman troops hauling items looted from the Second Temple. Historians now believe a layer of gold originally covered the plunder shown in the relief. (Submitted photo)

In 66 A.D., a minor protest against Roman rule got out of hand and led to the First Jewish Revolt. Emperor Nero sent 60,000 troops to Judea with instructions to crush it. Four years later, after a long siege, Roman soldiers under the command of Titus broke through the walls of Jerusalem, slaughtered the residents and destroyed the Second Temple.

Titus, who later became emperor, was honored in 82 A.D. with a 50-foot high marble arch near the Forum memorializing the success of his campaign against Judea. The inside wall of the arch contains a carved relief showing Roman troops hauling items looted from the Second Temple, including the menorah, trumpets and a sacred table. Recent scientific analysis has confirmed that a layer of gold originally covered the plunder shown in the relief.

In 1949, the leaders of Israel decided that the emblem of their new country should depict the seven-candle menorah, a symbol of Judaism for thousands of years. But the menorah taken from the Second Temple was destroyed in antiquity. The best evidence of what it had looked like was the relief inside the Arch of Titus. So designers used that relief as the model for the menorah now at the center of Israel’s official emblem.

Most visitors to the Roman Forum scurry past the Arch of Titus on their way to the Coliseum.  But the next time you are in Rome, look inside the arch for the menorah that not only became the symbol of Israel but confirms the golden splendor of the Second Temple.