You are at:Home»Current in Noblesville»A worthy walk for veterans 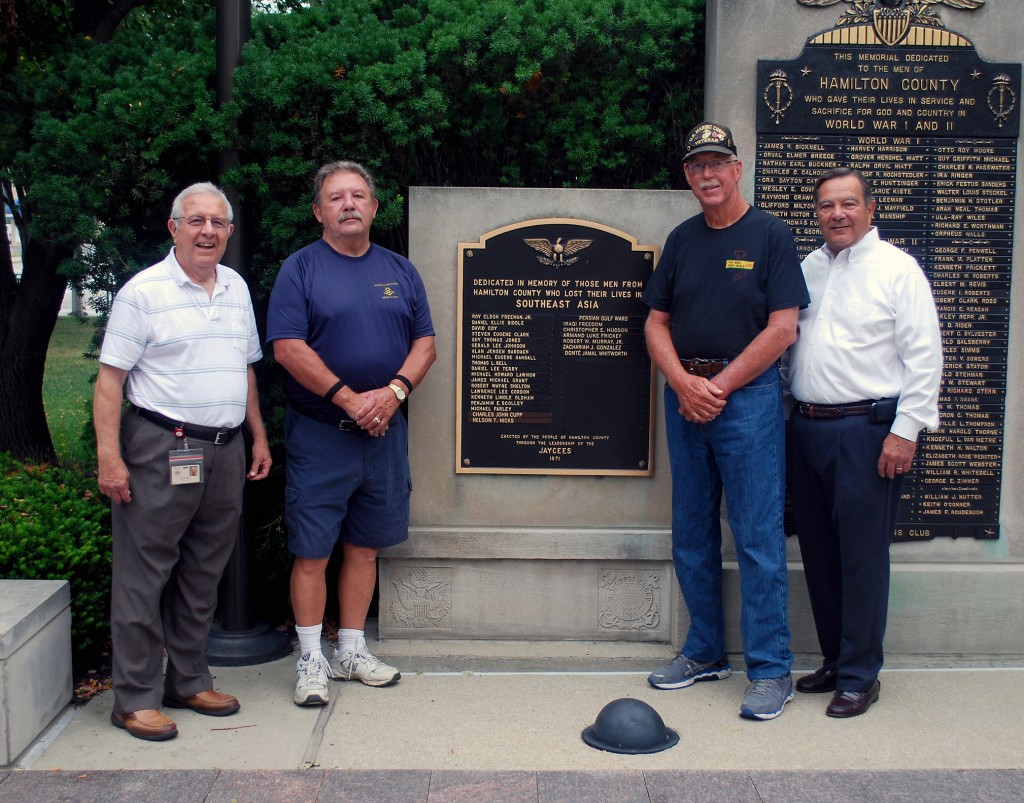 Approximately two-thirds of the way through his cross-country journey, Sgt. Chuck Lewis (retired) stopped for the night in Noblesville on Aug. 6. Lewis, 62, is a United States Marine Corps and United States Navy Reserve Veteran.

Mayor John Ditslear, right, wishes Sgt. Chuck Lewis a safe journey as he continues his walk to Washington, D.C. Lewis told Ditslear he would place one of the City of Noblesville pins at the national Vietnam Veterans Memorial.

Throughout his six-month, 3,300-mile “Walking for the Fallen” project, Lewis hopes to raise $50,000 for wounded and disabled veteran programs.

“It’s a national issue. I decided to just go for a walk… I’m not getting any younger or healthier,” the Ronan, Mont., resident said. “I wasn’t real happy with what’s going on in the country.”

From Noblesville, Lewis traveled to Cincinnati as he heads south to USMC base Camp Lejeune to visit a dying friend he served with for three years.

“Normally, it’s straight across to D.C. I’m going to visit with him and then make the two-week trek up to Washington, D.C.,” he said. “By the end of September, I want to be back in Montana before the first snowfall.”

Lewis’ advocacy for veterans began five years ago. When his children couldn’t come home for Christmas, he decided to don his Marines Dress Blues and stand at a major intersection in his hometown.

“Not everyone was going to be home for Christmas or major holidays,” he said. “I started standing at events and brought a Fallen Soldier Cross.”

One of the particular aspect of veterans affairs Lewis is trying to highlight is the alarming number of suicides. Lewis said a Dept. of Defense report stated that since 2005, more soldiers died by committing suicide than during combat.

“That’s only active duty and there were more than 6,000 soldiers killed in Iraq and Afghanistan,” he said.

Lewis said the other reason he walks is to remind citizens of patriotism and “what is the cost of freedom and what does it mean to people.”

“The cost of freedom means a whole lot more to me than some people,” he said.