You are at:Home»Current in Westfield»Cooperation brings movies to park 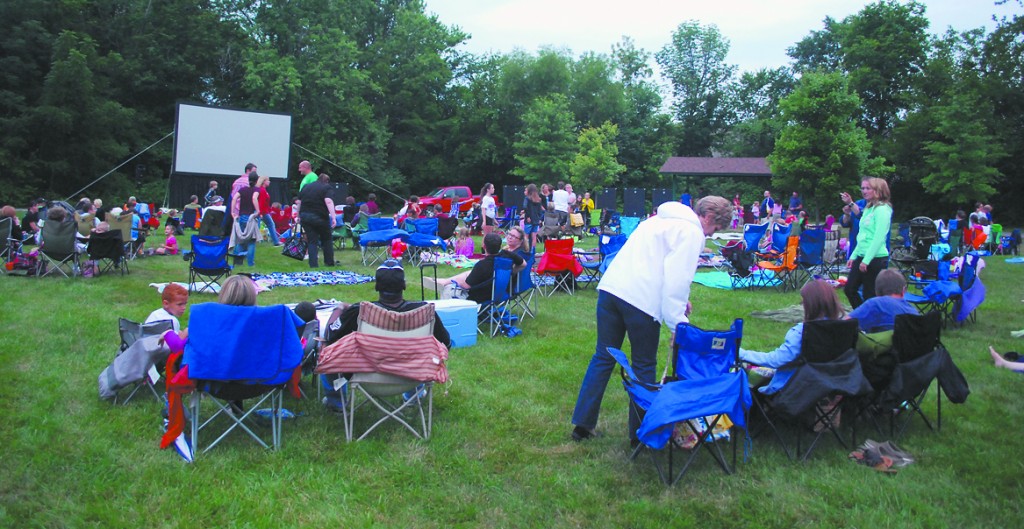 Community members prepare their seats and await the start of “Brave” on July 26 at Asa Bales Park. (Photos by Robert Herrington)

People began arriving for the inaugural Westfield Movies in the Park at 7:30 p.m. – more than an hour and a half before Pixar’s “Brave” started at Asa Bales Park. However, the planning to create a new Friday tradition took considerably longer and came about thanks to a partnership.

More than 100 members of the public enjoy “Brave” on July 26 at Asa Bales Park.

The idea for the movies in the park series was presented to the Westfield City Council in May 2012 by the Westfield High School Executive Committee. The students were looking to create a safe alternative for teens on the weekend. Stephanie Baumann, Westfield Parks recreation program coordinator, said the department was interested in creating the series “for quite some time” before the WHS Executive Committee’s presentation.

“It showed even more there was a demand for this in the community,” she said. “That demographic, the high school crowd, said this is something we want and want to have in our community.”

Unfortunately, the cost to purchase the necessary equipment was too much for the Westfield Parks and Recreation Dept. But, it presented the service-driven members of City Spring Church an opportunity to serve the community and form a stronger partnership with the city.

“We were unable to provide it until this. The partnership landed on our doorstep,” Baumann said. “It’s incredibly important because we are not able to do most (of our projects) without partnerships. We have a finite budget, but it’s our job to provide wonderful park experiences.”

“We want the first time people heard about City Spring was because they were served in one way or another. We’re happy our service speaks for itself,” City Spring Church Lead Pastor Matt Gaylor said.

*All start times are approximate.

Gaylor said City Spring has been around for a year, but leadership has been working on the church for the past three years.

“We want to be a part of the city so we went to the leadership to see what they wanted to solve,” he said. “We want to serve the community.”

After getting involved in the Westfield Youth Assistance Program and Westfield Rocks the Fourth, Gaylor said the church was looking to host a movies in the park series and rent the space if needed. City Spring meets weekly at Carey Ridge Elementary School. Gaylor said the church sets up and removes the equipment worth $70,000 every week in its temporary home.

“It all goes in every week. We thought, ‘Why not do it on a Friday night? It’s already portable.’ Our whole church is in a trailer,” he said.

The Westfield City Council paid for the first licensing fee, but Gaylor and Baumann said they still are looking for additional sponsors for the other movies. Gaylor said sponsorships are $500 to pay for licensing rights to show the movie in public and to offset the cost of the generator.