You are at:Home»Current in Westfield»Back to School 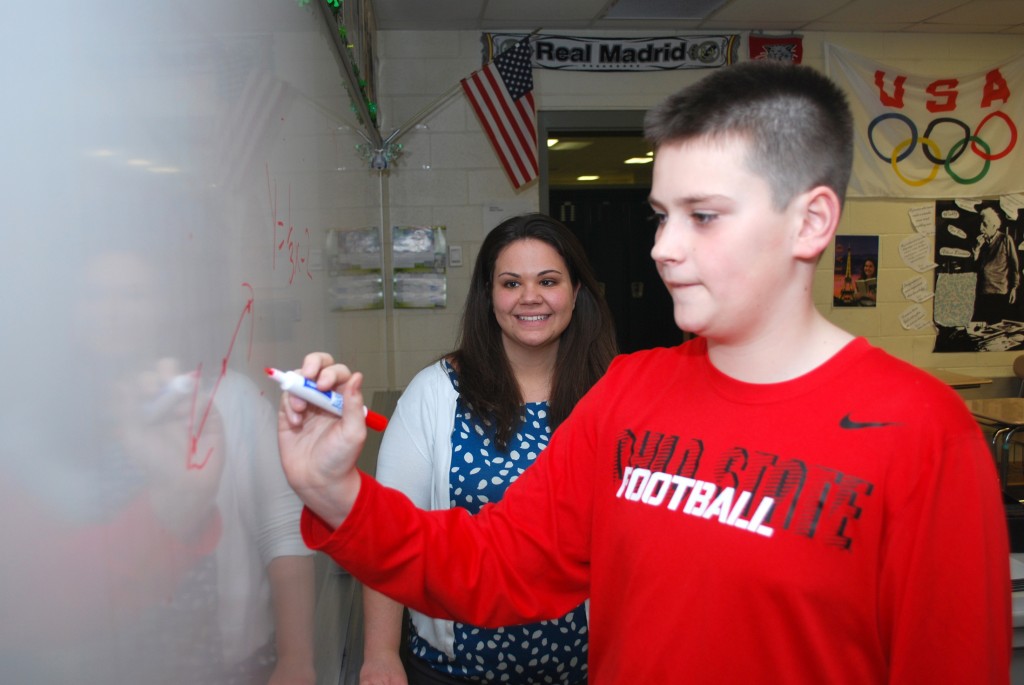 One academic team of 190 eighth-grade students will pilot the Bring Your Own Technology initiative at Westfield Middle School. Asst. Principal Ryan Haughey, who is heading this initiative, said the program is modeled after the one at Westfield High School.

“We’re pretty excited about it,” he said. “We had more than enough students interested to fill the team that we had to have a random lottery.”

The high school’s BYOT program has been in place for a couple years. While it is mainly used for AP classes, the use of technology is teacher and classroom specific. Haughey said as the program expands at the high school level it made sense to introduce it to the middle school. Before the program was extended, Haughey said a parent survey was conducted to gauge their interest.

“The results were extremely, extremely positive. It was pretty overwhelming,” he said. “Technology plays at everything they do in adult life. This is more than a typical computer class.”

While other districts are providing technology to their students, Haughey said having students bring their own offers two distinct positives to the district: it does not incur a lump fee for purchasing or maintenance of the equipment and no classroom time has to be spent getting students familiar with the new technology.

“They know it and know the ins and outs of it. They can hit the ground running on day one,” he said, adding that not having uniform equipment does create the drawback of incorporating different operating systems together.

Haughey said the district is not dictating what technology must be brought it, only that it is required to have internet and word processing capabilities, a screen larger than 6-inches and is not a cell phone. He said common items include iPads, netbooks and laptops.

“Technology is the core of what they do this year,” Haughey said. “They’ll utilize technology more efficiently in the classroom.”

To ensure safety, Haughey said all parents were told of expectations and students will take a digital citizenship class. Also, all technology will access the internet through the district’s filtered system. Haughey said the goal is to see how the pilot team goes and then survey parents again about expanding BYOT to all of eighth grade.

What else is new? 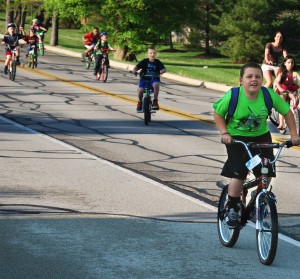 Westfield Washington Schools’ principals explain what will be different at their buildings this fall:

Shamrock Springs: Basic level Spanish will be infused with the physical education curriculum in fourth grade.

Monon Trace: The school will house the district’s TOTS program, childcare for 20-week-old infants through PreK age for WWS teachers, staff, Westfield city employees, and younger siblings of enrolled WWS students. Addition of Emotional Disability and Functional Independence and Transition Skills room, which is a class for severe and medically fragile students.

WIS: The building has changed the use of its additional time (ROCK Time). All teachers will use this time for remediation and enrichment to make sure it meets the needs of all students.

Westfield Washington Schools Supt. Mark Keen said more than 500 students in grades pre K through eighth attended WWS Summer Camps which included themed weeks of learning experiences. Many of these students, along with 650 others, attended WWS teachers and coaches-led Opportunity Camps revolving around academics, arts, technology, and sports and fitness. 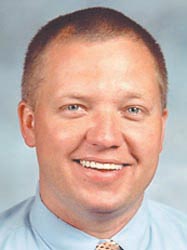 “The average review period for kindergarten through eighth-grade of the previous year is six weeks, maybe as much as eight weeks. Our teachers do some review for the first week. Saving five weeks multiplied by eight years is 40 weeks – a year more of education if we do it right,” he said.

Summer also was a time for teachers to learn and grow professionally as 176 staff members attended workshops in the areas of literacy, math and technology. To prep and provide optimal learning environments, Dave Mundy, assistant supt. of learning systems, said teachers have rewritten, aligned and developed curriculum and assessments, learned new materials and resources and created technology tools and units to enhance student learning.

“We are very appreciative of our staff members going above and beyond to grow professionally and for our student and parent support helping to make WWS a world-class learning organization,” Mundy said.

In February, the district conducted a 2014-15 calendar survey, in which the majority of respondents favored staying with a traditional calendar with dates similar to the 2013-14 calendar. As more school corporations adopt balanced calendars, the discussion is just beginning in Westfield.

“We’ll conduct another survey in 2014 for the 2015-16 and 2016-17 school years,” Keen said. “This will allow us to see how many schools may have gone to the balanced calendar and how their decisions may or may not impact us.”

Keen said the benefits other districts cited for balanced calendars include increased attendance (which was 96.99 percent at WWS last year) and reduction of summer learning loss. Keen said 80 percent of students participated in the district’s Summer Rocks. Utilizing the longer breaks for remediation also is not happening at schools Westfield talked with.

“From an academic standpoint, we don’t see the need,” he said.

Keen said other districts may have an impact on WWS. Even if Westfield sticks to its traditional trimester calendar, Keen said the district may have to create a different starting time to align with J. Everett Light Career Center and the Hamilton-Boone-Madison Special Services Cooperative. 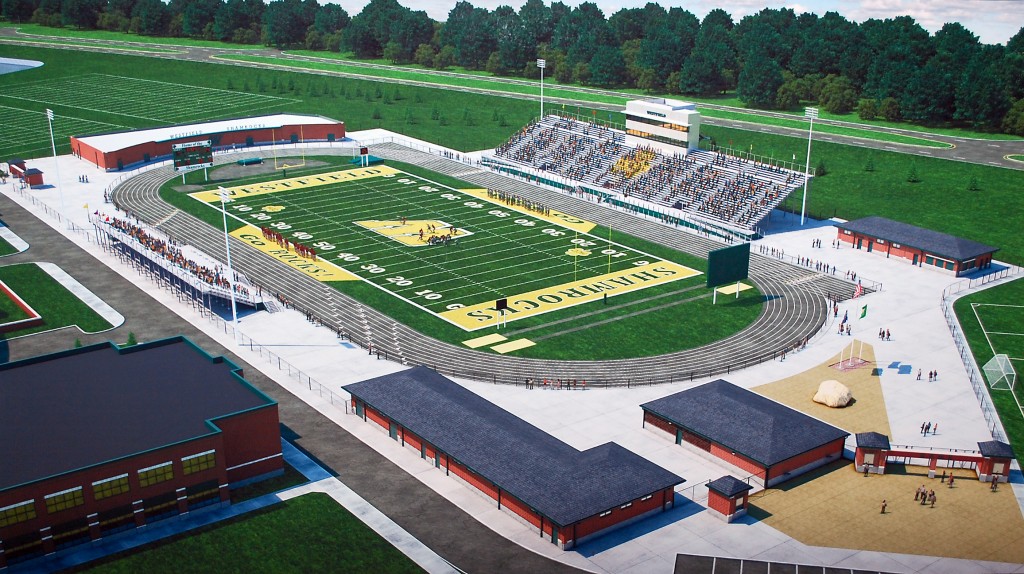 Construction will not be a factor this year at Westfield Washington Schools. The lone summer project, phase I of the new Community Stadium, will be completed this week according to WWS Director of Business Nick Verhoff. Verhoff said phase 1 was expanding the concession stands, which are used by the soccer fields currently, and the visitors’ locker rooms, which will be used by the Shamrocks. 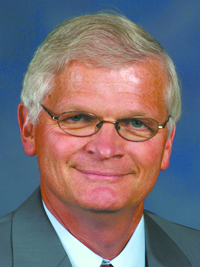 The district launched the capital campaign, Build the Rock, in late 2012 with the goal of raising funds to build a community stadium. The new field would not just be used for school games; it would be a community field and enhance community development. Build the Rock campaign aims to raise $7.5 million with a goal of $9 million. It will be built in three phases.

“No new taxpayer dollars will be used,” Verhoff said, adding that funds come from bond refinancing and donations.

While the campaign has received “some sizeable donations,” Verhoff estimates the first football season on the new field will come in 2015.

“Could be faster if we sell the land,” he said.

The land the district is looking to sell is the 14.1 acres at U.S. 31 and Ind. 32, which is home to the football/track stadium, junior varsity baseball field and practice fields. The Westfield Washington Schools Board rejected an offer to purchase the land on June 11 and asked attorney Jack Hittle to take steps to put the property on the open market.

“We’ve had multiple people that are interested,” Verhoff said. “We’ll probably have more of a definitive direction in September. Unless we see a dollar amount that knocks our socks off, we won’t make any more announcements until September.”

Verhoff said the biggest factor facing the district with the land sale is how to accommodate students to play elsewhere.

“The land sale and stadium are tied together,” he said. “It’s way too valuable to play high school sports on. It’s key to the city’s economic development.”

Per state law, the minimum bid the district can accept is $5.4 million, which is 90 percent of the property’s appraised value.