You are at:Home»Current in Westfield»Gas leak causes evacuation 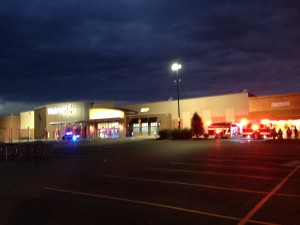 Police and fire units are at the scene of a ruptured gas line.

Approximately 100 people were evacuated from three Westfield Stores after a gas leak was discovered on Aug. 5 at 2001 E. 151st St.

WFD Spokesman John Barrett said at around 9 p.m. employees at the Rack Room Shoes store smelled an odor of gas in the building, called 911 and evacuated the building. The two neighboring stores, Walmart and Five Below, also were evacuated as a precaution.

“No one was affected by the flumes,” he said, adding that firefighters used an atmospheric gas thermometer to detect the amount of gas released. “Mercaptan levels were well below the explosive range.”

Barrett said members of Station 82, located nearby at 1920 E. 151st St., were on the scene in less than a minute and found a strong smell of gas outside of the building.

“Once behind the Walmart firefighters found a ruptured pipe and began to fix the leak,” Barrett said. “Within 20 minutes, firefighters had the leak temporarily repaired. When Vectren Gas crews arrived they went to work and eventually deemed the buildings safe for business.”

Wal-Mart reopened around 10 p.m., within an hour of the initial call.

“It was so close to closing time that when we were able to secure the leak it was time for them to close,” Barrett said of Rack Room Shoes and Five Below.

The cause for the gas leak is not known.

Barrett said the Aug. 5 incident was abnormal and “not a reoccurring thing” for the shopping area.

“There was a small gas leak in Papa Johns a couple years ago. It was a value switch in the store. The gas company came in and fixed it for them,” he said.