The Creekside Middle School Wind Symphony has earned an invitation to perform at the 67th Annual Midwest Clinic Conference.  Each December, this international band and orchestra conference draws more than 16,000 people from across the U.S. and 30 countries to Chicago’s McCormick Place.

Under the direction of Wendy Higdon and Chris Grifa, 64 Wind Symphony members will perform in a 45-minute evening program Dec. 20. 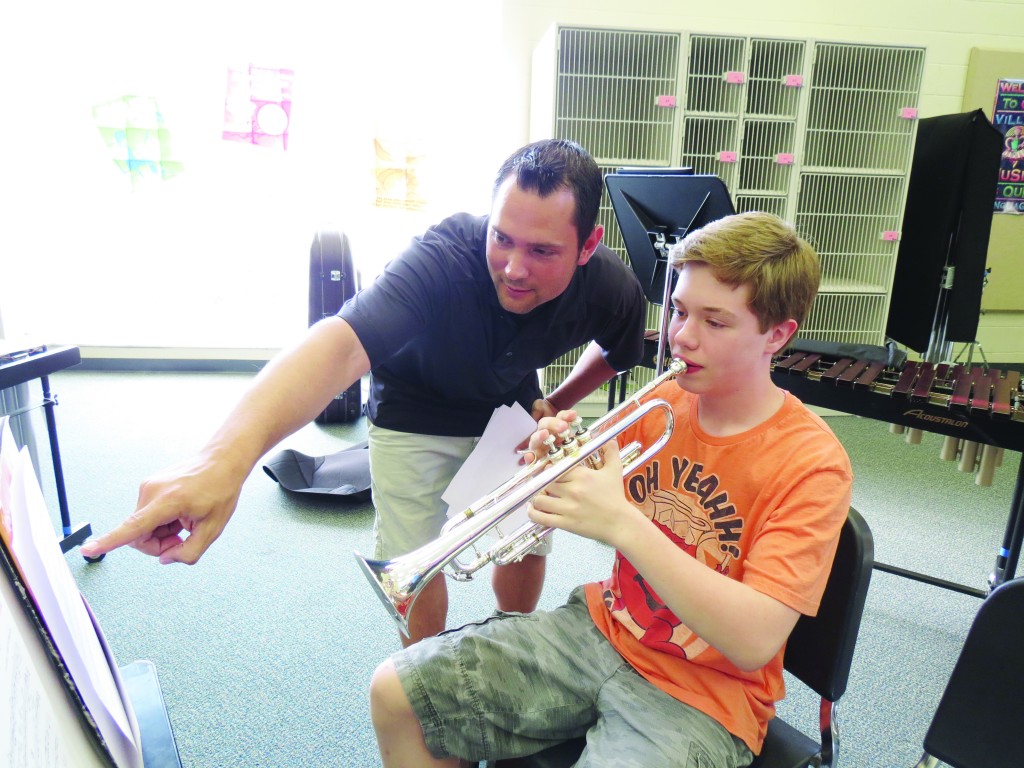 “Directors at every level throughout, not just the United States, but the world, aspire to have a group perform at the Midwest Clinic because it’s held in such high esteem in the professional world around the globe,” Ray Cramer, Director of Bands Emeritus at Indiana University, and Midwest Clinic board member, stated in the clinic’s promotional video.

The event’s website emphasized “the selected performance groups represent the finest ensembles imaginable.” The audition process required both CD and DVD submissions, an application, and recommendations from other directors by a March deadline.

“We spent quite a bit of time reading through the rules regarding the very extensive application process,” said director and Unified Arts Dept. Chair Higdon. “(We) even attended a workshop which focused on everything from rules for applying, to tips on the recording process, to music selection.”

“This (Ticheli) piece is a two-movement work that includes two wonderful folk tunes that are part of the musical fabric and history of the Cajun people,” Higdon said.

Wind Symphony’s first audition in 2011 was primarily a trial run.

“It’s extraordinarily rare for a group to be selected to perform at The Midwest Clinic the first time that they apply, but everyone has to start somewhere,” Higdon said.

Though their first recording didn’t claim a clinic spot, it did earn an invitation to perform at the January 2013 Indiana Music Education Conference in Fort Wayne.

“After that performance, we went into intensive preparations for our (2013) Midwest audition,” Higdon said.  “Our students did everything we asked of them without fail. They had great attitude and never let us down.”

Fifty-one of the students who performed on the audition will be in high school this fall, so twelve students who experienced the audition process remain. As the band seeks to “develop uniformity of sound” both directors agreed “the leadership of those (twelve) students will benefit the group greatly.”

Second-year percussionist Sydney Holtzapple has taken drum lessons since third grade with a focus on the snare. For the performance, she’s expecting to play a variety of instruments including the snare drum, timpani, bells and xylophone.

“A lot of people don’t realize exactly how complicated it is to be a percussionist,” she said. “The percussion section as a whole keeps the beat and time going in the band, and if we get out of tempo, then so does the whole band.”

Second-year member Nicholas Leinbaugh has studied clarinet for three years and was surprised by the clinic’s invitation.

“I knew that our band was very talented, but I also knew that performing at the Midwest Clinic is a very prestigious honor and very difficult to be invited to,” he said.

“I believe that all the hard work will pay off when we are in Chicago playing in front of thousands of people,” Leinbaugh said.

First-year member Nicole DiDonna earned her position in Wind Symphony after the audition, but will play flute in the clinic performance.

“It is a strange coincidence that both my father and I will have performed at the Midwest Clinic,” she said.  Her father, Dr. Michael L. DiDonna, played at the 1985 clinic as percussionist for Morehead Junior High School’s band in El Paso, Texas.

“My dad saved the programs and everything,” DiDonna said.

“Our whole family will definitely make the trip to support the school and our daughter during the performances in Chicago,” said her mother, Danielle.

In the midst of preparations and summer band camp, Director Higdon expressed concern about $64,000 in performance expenses.

“We have a group of parents who are working hard to help the students raise the needed money,” she said.  Anyone interested in supporting Wind Symphony can contact Fundraising Chair Jenell Fairman at jenell@coreplanningstrategies.com.

To make a donation to help the Wind Symphony raise the necessary funds for the trip, visit  http://carmelbands.org/middleschools/creekside.