You are at:Home»Current in Zionsville»Jain Temple made entirely of marble 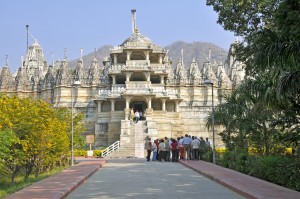 In the tiny village of Ranakpur, near Udaipur in western India, is the best known and most elaborate of the temples of Jainism, a religion founded in India at about the same time as Buddhism. Construction of this spectacular 48,000-square-foot temple, made entirely of light marble, began in 1439 A.D. When completed 19 years later, the temple included 1444 exquisitely carved columns, no two of them alike. The temple’s 29 halls and 80 domes are also decorated with labyrinthine carvings, many of people and animals. Remarkable as these carvings are, even more remarkable are the beliefs of the people who still worship in this temple.

The fundamental beliefs of Jainism are apparent even before entering the temple, when visitors must first remove anything made of leather. Jains believe that every living thing has a soul and see it as their primary duty to honor anything that is or was alive.

Aggressively non-violent, Jains often wear masks over their noses and mouths to avoid accidentally swallowing insects. All Jains are vegetarians and many won’t eat anything that came from tilling the soil because farming leads to the death of small animals. Many eat only nuts and fruit that have already fallen to avoid hurting the trees and refuse to be carpenters who hurt the wood they work.

Jains are very respectful of other religious beliefs, believing that all religions, including their own, reflect only an imperfect understanding of ultimate reality. The design of the Ranakpur temple witnesses this conviction. Four doors, one on each side of the temple, all lead to the center, where the four-faced statue of Adinatha, the revered traditional founder of Jainism, is enshrined. No matter which path is taken, the entrant inevitably encounters an image of the divine.

The almost surreal design of the Ranakpur temple is said to have been inspired by a dream divinely sent to its architect. The temple and the beliefs of those who worship in it can inspire another type of dream – a dream of a world in which everyone’s reverence for life and respect for the beliefs of others are at least a little more like those of the Jains.