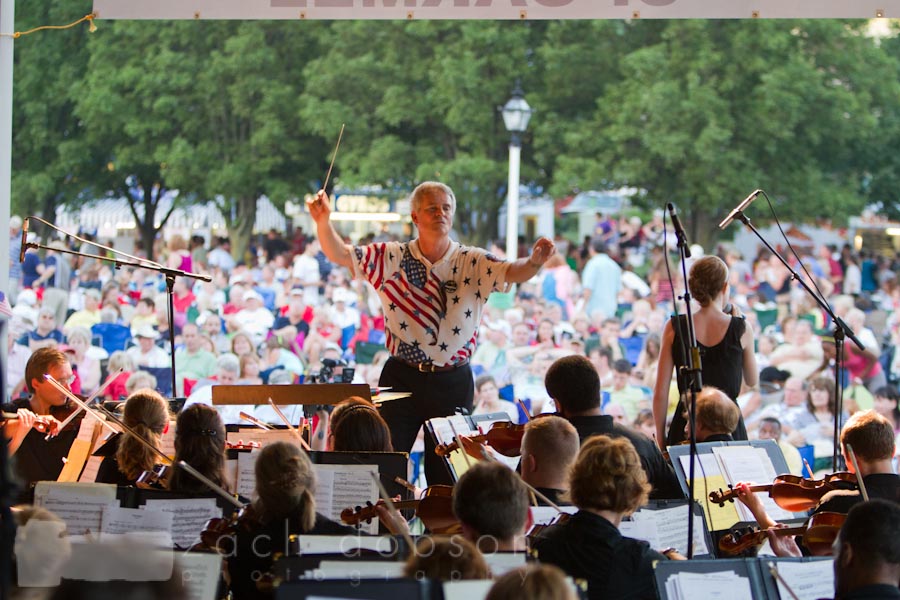 Under the direction of Conductor David Bowden, the accomplished Carmel Symphony Orchestra will present a stirring musical selection at CarmelFest on July 4th at 8:30 pm on the Gazebo Main Stage. Three members of the Wright Brothers Band, Tom and Tim Wright and John McDowell, will join the symphony to add vocals to select songs.

The CSO has partnered with CarmelFest since the first event 25 years ago. The Symphony performance has always been one of the entertainment highlights for the Festival.

“This year’s program selection will include musical compilations you would expect to hear at a presidential inauguration,” Bowden said.

There will be blends of instrumental sounds and vocals as the CSO performs the following (note – WB indicates songs where the Wright Brothers will accompany the orchestra):

In the first part of the show, the orchestra will salute the Armed Forces by playing the theme songs of each branch of the military while asking those who served to stand to be honored and recognized. The Wright Brothers will be providing vocal accompaniment.

The “Star Spangle Banner” presentation will include all of the song’s verses (not just the one most familiar). The piece is more than seven minutes long. The Wright Bothers sing in three of the verses. Under Bowden’s direction, this version of the National Anthem is unbelievably moving as the orchestration’s prelude and interludes build and build to a final crescendo, complimenting the lyrics that describe the night of the Battle of Baltimore during the War of 1812.  When Francis Scott Key originally penned his poem, he could not have imagined that his words could be so powerful and inspiring when set to music.

After the “Star Spangled Banner,” the orchestra will perform a beautiful rendition of “Mansions Of The Lord,” a very emotional song about soldiers’ sacrifices. Tom Wright’s smooth sound will add vocals to this piece. Close to the conclusion of the performance, the orchestra and Wright Brothers will invite festival goers to join in as they present “God Bless the USA.”  After the finale with “Stars & Stripes Forever,”the CarmelFest fireworks count down will begin