You are at:Home»Current in Fishers»Crowd pleaser 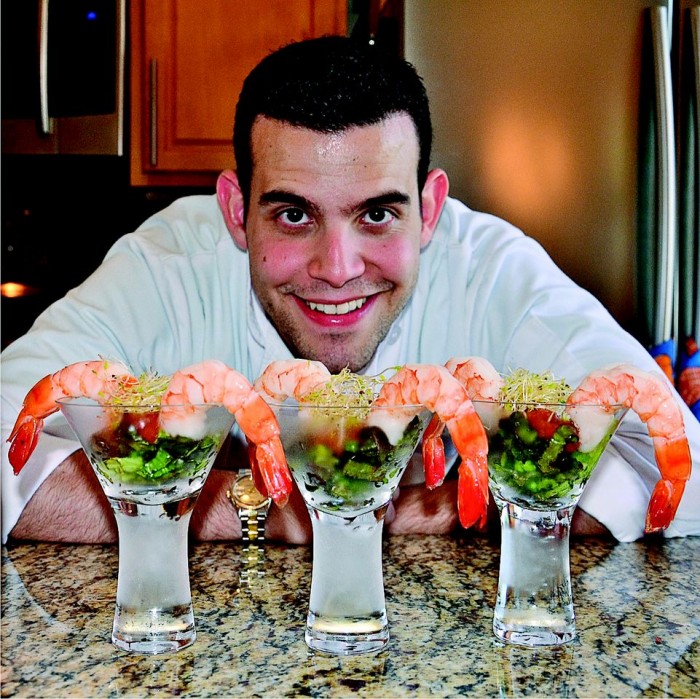 Gustavo Perrotta’s restaurant will be an intimate supper club

Fishers Resident Gustavo Perrotta is cooking up an opportunity to achieve a dream and give Indianapolis-area foodies a chance to gnash on meals with familiar elements and stops in their palates’ uncharted territories.

Perrotta, 27, won the Hottest Kitchen Entrepreneur Challenge, put on by Indy’s Kitchen and Reliable Water Services, two businesses entrenched in the food industry, last month. You may have seen him on WISH-TV’s Indy Style.

Up for tasting, and judging, were his Crab Mofonguito – a colorful Carribbean dish that includes cool guacamole, seasoned crab meat and deep-fried plantains – and a business concept.

He and his wife Katy will be starting Perrotta’s Kitchen, a “supper club” that will start off meeting once a month at Indy’s Kitchen.

As a kid, Gustavo grew up watching his mom cook meals for the family, learning a lot along the way. Now he spends his weekends cooking and entertaining for friends and family.

“People sometimes are surprised when I tell them that I’ve never taken a cooking class or anything,” he said.

He may surprise even more people when Perrotta’s Kitchen opens, fusing Latin, Asian and Italian flavors and making his hobby – cooking and entertaining – a business.

Perrotta grew up in the Dominican Republic. When not learning about cooking while watching his mother prepare the family’s meals, he had the chance to go to a private school.

He said the public schools in the Dominican Republic are much less organized than their U.S. counterparts.

Eventually he’d land at Purdue University, studying and earning a degree in economics, meeting his wife, Katy, along the way.

They have lived in Fishers for just under two years now.

Gustavo’s a financial analyst. Katy’s a certified public accountant.  He said in their spare time, they toy with a business plan and try and figure out if it’s feasible to open up a restaurant in the future.

A patron of local food emporiums, including Goose the Market and Nicole-Taylor’s Pasta and Market in Indianapolis, Perrotta found out about the Hottest Kitchen Entrepreneur Challenge through Goose’s social media presence and entered.

“I kind of wanted to see if the dishes I made would catch the eye of people that didn’t know me,” he said.

He caught the judges’ eyes, and won the competition, earning seed money, cookware and more.

Perrotta’s kitchen will be a supper club. Groups or individuals can buy one or more of the 12 available seats for each event, with various price points, depending on the size of the group.

Patrons will be able to look up what’s on the menu in advance and decide whether they want to join Gustavo as he cooks up a four-course meal with the patrons around him.

In addition to picking what dining experience to embark upon, patrons provide their own drinks, pairing their preferred beverages with what Gustavo has cooking.

Gustavo said they’re hoping the target opening date for the venture will be in mid-to-late August.

“The main thing is having a place where you’re able to have affordable, gourmet food,” he said.

Katy, who helped Gustavo during the competition and will continue to do so with the business, is excited for the beginning of Perrotta’s Kitchen.

“I think it’ll be great for him also to start to get that hand’s on first experience with customer service,” Katy said. “For him to be put into a situation that’s more people that he doesn’t know – It’s going to be great experience.”

“I feel that starting off right now, it’s going to be an awesome time and an awesome experience,” Gustavo said. “And (I will) hopefully (be) meeting a lot of different people and expressing their love for food.”