You are at:Home»Current in Fishers»Flight of time 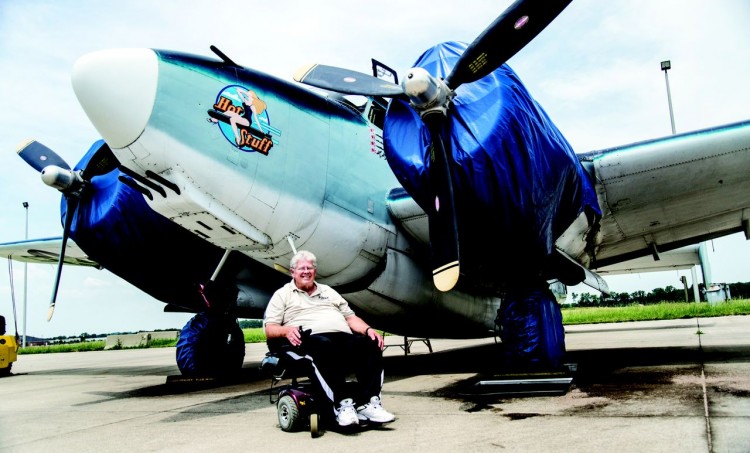 Fishers resident Roy Pellegrin helped restore and repair a different kind of hotrod, one that he and a not-for-profit are trying to keep in the air.

Pellegrin is the treasurer of the American Military Heritage Foundation, a local not-for-profit that maintains and operates a piece of history, and what Pellegrin describes as a “hotrod of bombers,” a Lockheed PV-2 Harpoon WWII era bomber.

“It could outfly a Japanese (Mitsubishi A6M) Zero,” he said. “It was a fast airplane.”

With his and the foundation’s help in the mid-2000s, it’s a fast plane again.

“When you’ve got 4,000 horsepower worth of engines towing that little airplane, you feel like you’re driving a Ferrari,” he said.

Long before Pellegrin would set his sights on helping fix the ailing bomber, he worked on much larger aircraft used in different theaters of battle, including Vietnam, the Cold War and beyond.

Starting in the early 1960s, Pellegrin worked as an electrician, servicing gargantuan B-52 Stratofortress bombers and much smaller B-58 Hustlers.

After an eight-year stint in the Air Force, Pellegrin left the service and after two jobs, founded his own electronics company.

The gigantic aircraft he started working on more than 50 years ago still serve a purpose in the U.S. Air Force. B-52s were used in both Operation Enduring Freedom and Operation Iraqi Freedom.

While aircraft like the B-52 bomber still operate on a regular basis, the foundation’s PV-2, named Hot Stuff, is one of only 535 made, let alone of three that still fly.

“We need to keep it flying,” Pellegrin said.

To keep the flying museum in the air, Pellegrin had to dive into fixing a lot of issues in the mid 2000s.

Among the problems plaguing the plane were faulty fuel gauges, incorrect rewiring, bad engines and no way of knowing for sure whether the plane’s landing gear was up or down.

Pellegrin said they started from scratch, going to work on the plane system by system, until it was up to snuff again.

The process took two years and stringent rules for anyone doing work on the plane, which Pellegrin credits to one of the group’s by-the-book pilots. Individual projects on the plane are still being worked on.

“If you were going to work on that airplane, you had to be an expert,” he said.

“Roy’s been a big asset for the organization,” AMHF President Rich Suiter said, “particularly when it comes to the electrical side of things.”

Putting a dollar amount on Hot Stuff isn’t as simple as slapping a price tag on it.

Pellegrin and another contributor bought debt leveraged on the aircraft, and at least one offer has been made, but the group didn’t sell.

Flying the classic plane is an expensive feat in itself. The Harpoon can hold 1,000 gallons of fuel, with gas costing $6.75 a gallon.

Keeping Hot Stuff up and running has been more difficult after federal budget cuts put a halt on many of the nation’s airshows, the foundation’s bread and butter.

“It’s just a piece of history,” Pellegrin said. “If you don’t keep it alive, it’ll just go by the wayside.”