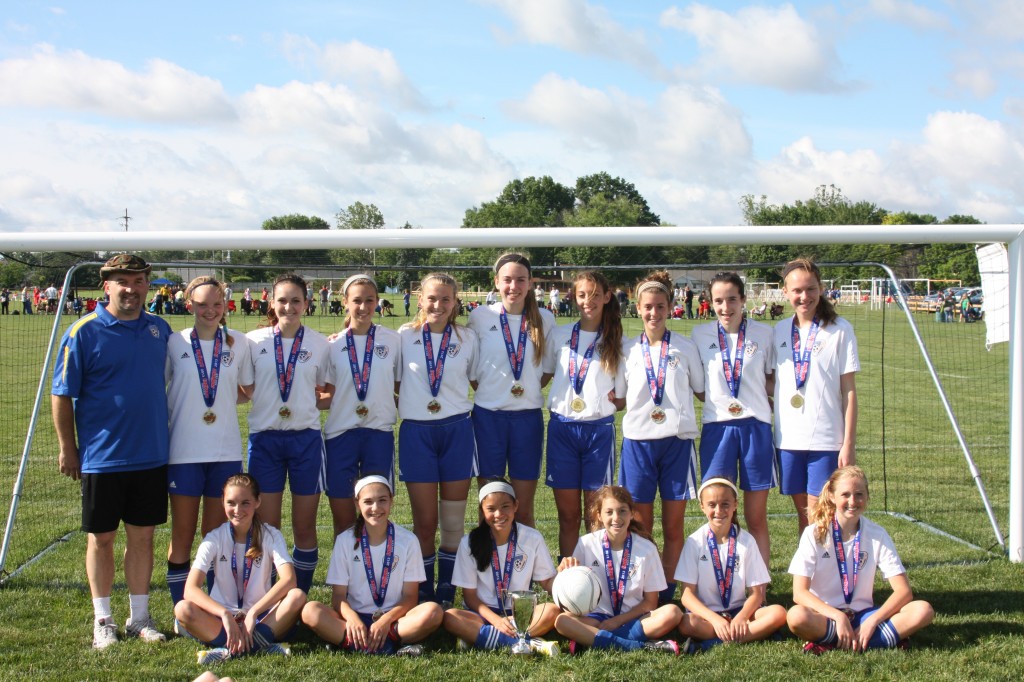 The Carmel Dads’ Club Select soccer program was established in 2009 to give children that lived in Carmel another source to play travel soccer without the expensive organizational and team fees that other clubs hold. The program is run by volunteers with the assistance of the Carmel Dads’ Club administrative staff.

The Carmel FC U14 Girls Gold team started playing in the Club’s Select program from its inception and never looked back. Last June, they finished as a semi-finalist team in the 2012 Challenge Cup and were also finalists in the 2012 Red Lion Tournament. Their teamwork and devotion for the game didn’t stop there as they started pushing each other and striving for excellence in the fall season.

While playing in the very competitive Indiana Soccer League 1st Division, they were finalists in the 2012 FC Pride Cup and the Socctoberfest tournaments respectively. When spring came, the Carmel FC girls won the Midwest Soccer Classic in Terre Haute by a total goal differential of 22-3 which became a tune-up for the Challenge Cup.

In the 2013 Challenge Cup, the Carmel FC U14 Girls Gold team quickly found that this year’s cup was going to be about perseverance. They found themselves down 3-0 at halftime to a very good Marion Lightning team. All year, Bill Stumbo and Doug Latham coached the girls directing soccer as a 1-0 game. Being down 3-0 was definitely not planned. The girls came out for the second half, on fire, and they downed the Marion Lightning 5-3.

The girls never looked back from that point on as they came out later that day to beat another good team in Three Lions 3-0. The next day they beat the host team, Terre Haute Flyers, 5-0 to advance for the second straight year. Carmel demolished Terre Haute 5-0 as Morgan Stumbo buried two upper 90 penalty shots from 30 yards out in the back of the net. The next team on their journey was in Columbus, Ind., where they were met by their sister team from Carmel FC coached by Jim Hawkins.

“It’s probably one tough thing to encounter a coach that already knows the strengths and weaknesses of your players”, Stumbo said. The game was fought hard and it took overtime for Stumbo’s team to come out victorious and to become the first Carmel FC team to advance to the finals. In the finals they faced the Franklin Hurricanes, a team that had very good foot-skills combined with grit. The match was fought tooth and nail until the 60th minute. Carmel’s Ally Evans was nearly pulled down by the goalie and both defenders. She found a way to regain her balance, hurdling the goalie and kicking the ball into the back of the net to secure the victory. After the Challenge Cup victory, the Carmel FC U14 Girls Gold team went on to be a finalist in the Classic at the Rock tournament in Center Grove, thus ending their tenure in the Carmel Dads Club Select soccer program. They leave Carmel with two tournament wins, four finalist finishes and one semi-finalist finish in the last year, as well as being the 2013 Indiana State Challenge Cup Champions. This type of heart and dedication, combined with respect for the game, is what the Carmel FC 99 Girls Gold team and the Carmel FC soccer program is all about.