You are at:Home»Current in Carmel»Carmel Community»Young Carmel Author Has Second Book in Sci-Fi Series Due Out this Summer 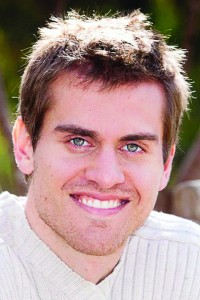 The story: Two young brothers, separated at birth, who both possess supernatural powers. Each is out to destroy the other until they realize they must unite to fight an evil greater than both of them as the hunters become the hunted in the urban fantasy “Abilities.”

Carmel author Marc Quaranta, 24, has both a fertile imagination and a savvy mind for promoting his work. These skills combined have brought the young author an impressive level of success for his age. He currently has two books published, “Abilities,” which is the first of a five-books series, and “Dead Last,” a thriller about  a small group of survivors of a deadly airborne virus who finds themselves stranded in an Indianapolis-area television station.  The second book in his “Abilities” series, “The Chosen Sun” is expected to be released by early July.

In terms of marketing his work, Quaranta was influenced by an independent Minnesota writer named Amanda Hocking, who started self-publishing books online at age fourteen and has now sold more than one million copies. He began publishing excerpts from his books on an indie-author’s site called Smashwords, and also followed sci-fi publishers on Twitter so that he would know immediately when those publishers were accepting submissions. When that tweet came out from Seattle-based Ring of Fire publishers, he dropped what he was doing and ran to his computer to send in his novel. After a nerve-wracking month of waiting, he finally received the email he had been hoping for; “Abilities” would be published. Ring of Fire also invited him to participate in a collaboration of seven authors called 7DS, and two additional books will result from that collaboration. Recently released “Dead Last” is published by North Carolina-based Twisted Core.

His inspiration in storylines and content is Michael Crichton. “He can make the impossible seem possible; even probable,” says Quaranta. He also had a teacher at Carmel High School who made quite an impression on him in his freshman year. Mr. Brinkley, (Jerry) who was president of the Medieval Enthusiast’s Club, came to school in a full-on knight costume and walked around in it all day. “He was definitely going out on a limb,” recalls Quaranta. “To do something like that and have a bunch of fifteen year-olds judging you all day is not easy. But I remember him saying, ‘Yes, this is weird. But in fiction, this could happen. You can create a scenario out of nothing and make it normal by writing about it. Write a short story about this.’”

Quaranta is now at work on the third book in his “Abilities” series and has the last two books of the series plotted out already. He holds a telecommunications degree from Ball State, but also plans to return to school this summer to get a teaching certificate so that he can teach creative writing to young people. He is currently employed as an instructional assistant at Carmel Middle School, where he works with special needs children. His books are available on Amazon, and more information about Quaranta can be found on his Facebook author page and Smashwords.com.