You are at:Home»Current in Zionsville»Hoping for the End

Cancer. One word. A word no one wants to hear. But, according to the American Cancer Society, in 2011 it’s estimated more than 1.5 million Americans received that diagnosis. Ask anyone you know and chances are they have a family member, loved one or friend who has been told they have cancer.

“Cancer is something that impacts a lot of people. My first exposure to cancer was in the third grade when a classmate was diagnosed, and her doctor came to talk to us and that stuck with me,” 26-year-old Laura Fonseca said. “I wanted to do something big in Zionsville that the community could rally around to help fight this disease.”

That’s why, as a high school junior, Fonseca worked with the American Cancer Society to bring its annual Relay for Life fundraising event to town.

“The American Cancer Society recognized that I was young so I had a good sponsor from them, and we all worked together to unify the community and gain support for the event,” Fonseca said.

The first year, $56,000 dollars was raised for research. Fast forward 10 years and the Zionsville RFL will celebrate reaching $1 million raised by the community.

“Relay for Life is a team event and you do fundraising before, during and possibly after,” said 2013 chair Angie Leary. “Anyone who wants to get together to raise money and fight against cancer forms teams of anywhere from 5-15 people.”

In 2004, Leary formed a family and friends team called The Pirates of Zionsville. Two years before, her mother-in-law had passed away from lung cancer. They raised money by making and selling beaded bracelets.

“I wanted to do something as a family and get my kids involved in giving back to the community. And, I wanted them to start thinking outside their world and do something in honor of their Gram,” Leary said. “Since we started participating in Relay, my mother and father are now both cancer survivors, as are my sister-in-law, a nephew, great nephew, and in January, a friend passed away from cancer.”

Relay for Life is the ACS’ signature event and is the largest fundraiser across the U.S. Events are held overnight as team members camp out awaiting their turn on the track. 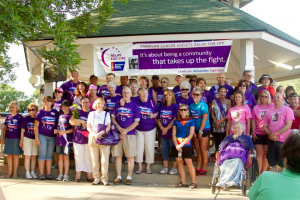 “You can even sign up that day or just come and donate or shop the silent auction or just enjoy the games and activities and buy food,” Leary said. “All of the money raised goes to the American Cancer Society.”

The event is also a chance for those fighting the disease to talk to others battling cancer.

“It’s really cool for newly diagnosed people to talk to those who might be 5, 10, or even 15 years out of a similar type and see there is hope after a cancer diagnosis,” Leary said. “We call anyone who has heard the words ‘You have cancer,’ a cancer survivor. We just try to promote wellness and preventative measures and any kind of support that we can.”

This year’s Relay for Life is the 10th anniversary and welcomes the community to a special Party in the Park celebration. It will be from noon Friday to 10 a.m. Saturday at Lions Club Park. Events will include Silly Safari Show, dunk tank, Ronald McDonald show, a free concert by the Hunter Smith Band, as well as the annual Luminaria Ceremony.

“The (luminaria) bags are all decorated in honor of a loved one who is a survivor or in memory of someone no longer with us and they remain lit all night,” Leary said. “A highlight for many is to come at 2 or 3 a.m. and walk the path. It is a beautiful and moving site. We usually have more than 2,500 that light the way.”

With $1 million raised, Leary hopes the event continues to grow – with one final goal.

“The main goal is not to hold any more Relay for Life events because we have eradicated cancer,” she said. “This isn’t an event we want to see go on forever – just one final big one to celebrate the end of cancer. How great would that be?”