Is the struggling business district about to see a revival? 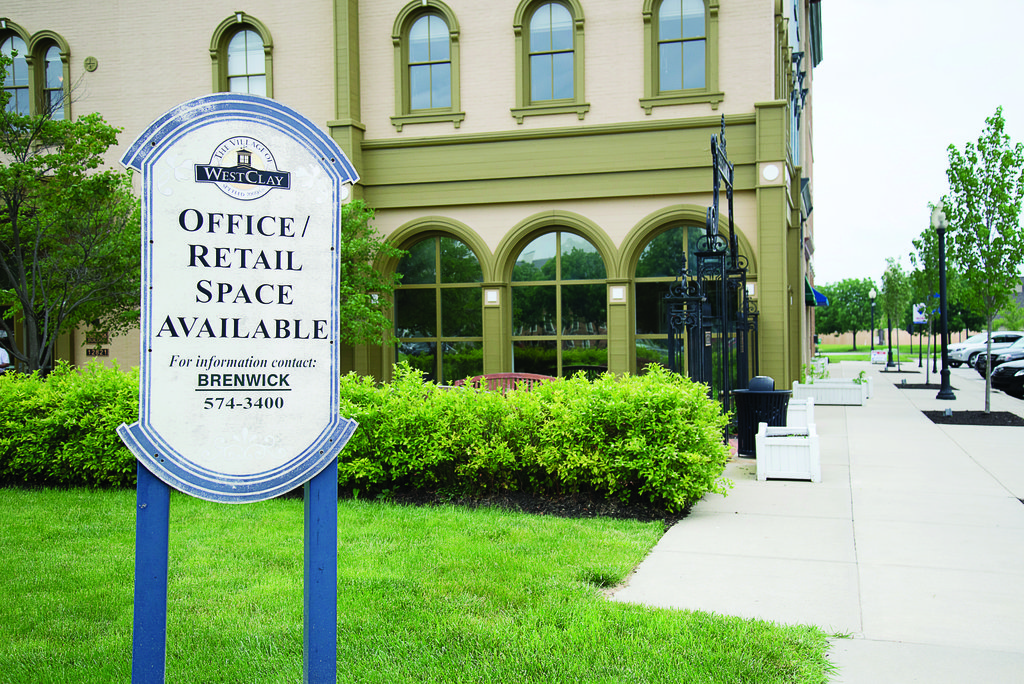 It’s a warm summer day, and the Villages of West Clay is brimming with activity.

Workers are laying sod and building dozens of new homes and condos. In the parks, dogs are leading their owners across the thick, deep-green grass.

But in West Clay’s business district, it feels more like a ghost town. The Harvest deli and market is closed, as is Pamfilio’s Italian Restaurant.

Seemingly every other window in the retail area has a For Lease sign. A few stray businesses remain open – a gym, an animal hospital, and an investment firm, among them – but a visitor might expect to see a stray tumbleweed blow across the road.

“I live in the village, but have absolutely no clue why (much of) the retail portion of the village is struggling,” said resident Larry Stevens. “The dry cleaner seems to be doing well, and CVS appears to be thriving. … The loss of the restaurants is more puzzling. They appeared to be busy.”

Stevens said he was disappointed, but not frustrated, that the lifestyle he and other residents were promised – basically a self-supporting small town with the amenities of a larger city – has not yet been fulfilled.

The Villages of West Clay seems to have the demographics that any business would kill to be near; the affluent community is filled with growing families with plenty of disposable income. Stonegate in Zionsville was built around a similar concept and has had success with a much smaller commercial district. So why is the Villages of West Clay unable to attract or keep businesses? Even local commercial real estate brokers are perplexed.

Judy Berthold, a sales and marketing professional for West Clay, admits the retail side has been somewhat slow to develop, but that’s changing as more people continue to move in on the residential side. In fact, she said, the retail district would look much busier today if it weren’t for the legal problems of Charles Blackwelder and his family.

Blackwelder, his son Chad, and daughter Cara Grumme, owned three businesses in West Clay, including Harvest and CFS, their real estate investment firm. In February, the Indiana Secretary of State’s office accused the trio of securities fraud, alleging they bilked their mostly elderly clientele out of more than $10 million.

The state-appointed receiver in the case, Mary Slade, is in the process of liquidating the Blackwelders’ assets, including Harvest. Slade’s law partner, Pat Drewry, refused to comment on the case, but Berthold said Slade is currently weighing offers on Harvest and the Blackwelders’ other West Clay properties.

“She’s already talking to two potential owners, one local and one national, to put a restaurant in that spot,” Berthold said. “They’re not waiting for the court case to be finalized to sell (the properties).”

Berthold said a host of major tenants are set to break ground in or near West Clay’s retail area in the coming months, including an Irish pub and a gas station/sandwich shop near the CVS that will echo the pharmacy’s art-deco architecture.

“We’re really excited about what’s happening,” Berthold said. “I don’t see the area as struggling at all.”

George Sweet, the developer behind many of these projects, also didn’t return a phone call seeking comment by press time.

“Chuck is an honest guy who had some financial trouble,” Barnes said. “What happened to him was the insolvency of his business, not securities fraud.”

Barnes couldn’t say specifically how many clients, mostly elderly, purchased the investments, but guessed it was “more than 10, but less than 100.” More than a dozen former clients have filed claims so far, ranging from $5,000 to nearly $240,000.

Slade, the court-appointed receiver, has made nearly a dozen motions to Hamilton County Circuit Court Judge Paul Felix asking to sell various properties throughout the area.

A 9 a.m. hearing is scheduled for Hamilton County Circuit Court on June 6.