You are at:Home»Current in Fishers»Here comes the sun 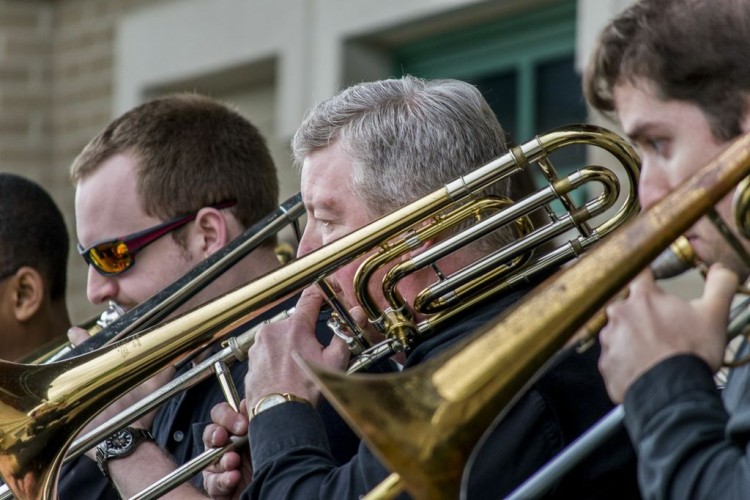 Fishers Music Works is looking forward to a bright future

After a 10-year journey and much planning, the clouds literally parted for a new music collective’s debut performance at the Nickel Plate District Amphitheater recently.

The Nickel Plate Jazz Orchestra, a 20-piece jazz group, played for a crowd of 120 concert-goers on May 11.

As the trumpets blared brassy, warm harmonies and the guitarist twanged through each jam, on-lookers popped open umbrellas as cold rain came down on the crowd only a few songs into the performance.

And then the sun came back out, and the umbrellas in the crowd closed up and were put aside for the show’s final numbers.

The Nickel Plate Jazz Orchestra belongs under a different kind of umbrella years in the making – Fishers Music Works.

Now they’re working to build upon the part music plays in residents’ lives as the town races toward an uncertain future as a city.

It takes a village

“(Fishers Music Works) is a locally based group providing high quality music for Fishers residents in and around town,” Todd McCready, associate music director, said. “We’re not looking to go play all over the state or the world or anything. We just want to play here, just to fill a gap in the local culture.”

McCready, a band director at Riverside Junior High School, is just one player in the group trying to build and establish the music consortium geared toward Fishers residents.

During what has been a nearly 10-year pursuit of that goal, Whisman said the couple experienced setbacks with two other groups, which included the now defunct Fishers Music Society.

In the past two years, Fishers Music Works President Rob Lawyer picked up the conductor’s baton and picked up the tempo with the project.

Lawyer, CFO at Mayer Najem Corp., loved music since his days taking lessons, and after listening to a radio show some time ago by Indianapolis jazz icon Chuck Workman, his passion for it all was reinvigorated.

He would talk to Whisman about pulling the group together and bring McCready into the fold after meeting him at Riverside for a parent-teacher event.

Lawyer said McCready was explaining lesson plans and how the students would learn about musical fusion in New Orleans.

His reaction: “Oh my gosh, I want to take the class.”

A little bit of networking later, McCready was on-board.

McCready took charge of the Nickel Plate Jazz Orchestra at the inaugural performance through the rain and shine. The group’s music director, Dr. Keith Kunda, was absent with his daughter graduating from Butler University the same day.

“Did you notice how the sun came out when Sean (Imboden, a tenor saxophonist) started playing?” McCready asked the audience. “That’s the kind of player he is.”

As the 20-piece band jammed through tunes by the likes of Billy Strayhorn, Sammy Nestico and Hoagy Carmichael, to name a few, bicyclists slowed down at the amphitheater and took in the songs, quietly listening from a distance.

Concert-goer Diane Zarse said music is important to the community because it helps students with organization and social habits, based on her daughter’s experiences.

“Music is just very important for the soul,” she said.

Students took the stage next to their teachers to play the concert. Maya

Patterson, a Fishers High School junior, performed a vocal solo before heading to prom that evening.

“I’m glad that they’ve gotten something together for Fishers,” Susan Miller, another concert-goer, said. “I know there have been a lot of things in other communities, but to see a music organization that’s based here with people in Fishers, I think that’s fantastic.”

The Fishers Arts Council, along with other sponsors, made the first concert possible, and if they can secure funding, Fishers Music Works will be back in July and August for its next two concerts. For more information, visit www.fishersmuicworks.org, as well as the group’s Facebook page.